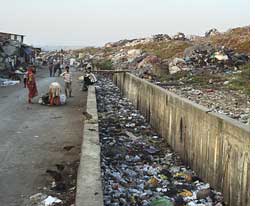 Another risky landfill plan in Mumbai

THE Municipal Corporation of Greater Mumbai plans to partially close down and modernize the Deonar dumping ground in the eastern suburb at a cost of Rs 5,000 crore, but environmentalists fear it may end up increasing the risks of land subsidence and pollutants leaching into the groundwater.

The proposal is to slightly compact and cover garbage, dumped up to 35 metres above the ground on 65 hectares (ha), with polythene sheets and soil and then convert it into a green belt. It also involves shielding a nearby creek with a concrete bund to prevent leachate from reaching it. This will be done in two years. The contract for the most controversial part of the project, partial closure, has been given to a consortium of agro-chemical firm United Phosphorus Ltd, Kerala-based poabs Organic Estate and Germany's ndse. The rest of the 67 ha will be developed into a scientific landfill with composting facility. The corporation's standing committee has sought clarifications on the proposal.

Experts say the corporation is repeating the mistake it made in the Gorai dump closure project last year. "Wastes in a landfill cannot be just capped and closed," said Amiya Sahu, president of the Mumbai-based non-profit organization National Solid Waste Association of India. Piles of garbage need to be compressed to stabilize, and treated to prevent leachate formation. Just covering the creek side will not stop leachate from contaminating water, Sahu said.

A J Lagwankar, the corporation's executive engineer for the project claimed it could also earn carbon credits. Pipes will be embedded in the closed dump yard to collect methane and generate electricity from it. Sahu criticized the plan, saying, "When the waste is not compressed properly, it generates methane. Why allow gas formation in the first place?" He pointed out another problem: the corporation does not have sanitary or environmental engineers, so mechanical engineers are running waste management projects.

Experts claim there are better methods of treating solid waste and closing a landfill. Maley bio-treated a 12-ha landfill in Nashik, using vegetable waste and cow urine, and reduced its height from 12 metres to ground level. In 1997, Nandkumar Moghe, a Mumbai-based environmentalist, used organic farming to convert a dump site in Mahim into Mahim Nature Park.