It's a hot shot 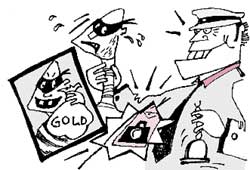 police officers may soon be equipped with a hidden watch-size camera that sends pictures back to their police stations. The spy camera, developed for military use in the us , has a lens only two mm wide and the complete package of camera, radio transmitter and battery measures only 24 mm 24 mm 12 mm. This is small enough for the package to be sewn into a policeperson's shirt. The technology was originally developed at the us government's Oak Ridge National Laboratory, Tennessee, states a report in Practical Wireless , London (November 1996).

The video feed from the camera can be encrypted and sent either to the policeperson's car where it can be recorded, or back to the police station where other officers can view the pictures. The system is a real time-saver and opens up a lot of new opportunities for law enforcers to gather evidence. The system can be used to identify suspects and will do away with the need for police officers to send descriptions of suspects by radio. Officers in the police control room can actually see the suspect and any other details put in front of the camera.

The resolution of the camera is so good that policepersons can read the number plates of cars. The camera is efficient in poor light and tests have shown that it works 50 times more effectively than standard video cameras in low light.

This video camera can have many other uses. The transmitter can be manufactured more cheaply and so could be used by farmers to keep tabs on their herds. It could also be made suitable for tracking children. A tiny radio transmitter would be attached to a child and parents would use a receiver to find out where the child is. A smaller version of it could be used in medicine. This camera would be far cheaper than the conventional endoscope camera that is inserted into the body to examine the insides of patients.