It's all in the food

Good nutrition matters even in the womb 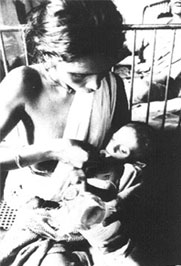 why do babies that are born underweight run the risk of developing diseases such as heart disease and diabetes? David Barker and his colleagues at the University of Southampton General Hospital, Southampton, uk, have found that weight at birth and in some cases, low weight at even one-year of age, are associated with an increased risk of hypertension, non-insulin dependent diabetes and endocrine disorders.

Recently, the researchers got some more evidences to substantiate their hypothesis. In a population of Finland, they found that men with low weight at birth had high death rates due to the coronary heart disease. Barkers group reached the conclusion after studying the well-maintained records of 3,302 persons born between 1924 to 1933 in the city of Helsinki, Finland (British Medical Journal , Vol 315, No 7114).

There was a reason behind selecting Finland for the study. Until recently, the country had exceptionally high incidence of the heart disease among developed nations. Even today, when death rate due to this disease has shown a decreasing trend in other European countries, it is still high in Finland. Nearly half of the overall deaths in the country are due to the heart disease. Studies showed that such high deaths could not simply be explained by life styles of Finnish men and women.

The researchers offer a credible explanation for such high deaths. The coronary heart disease and its biological risk factors such as hypertension, non-insulin dependent diabetes mellitus, and abnormalities in lipid metabolism and blood coagulation, are associated with low birth weight of infants. The risk of dying from heart disease for these malnourished children is independent of their life style. It indicates that even if they are not obese, do not smoke and eat right kind of food and exercise throughout their lives, they can not shake off the risk. Their death warrant appears to be written and sealed in the womb.

Data collected from Barker's laboratory have led to the hypothesis that the coronary heart disease is programmed in the mother's womb itself. The inadequate nutrition for the growing baby forces them to make changes and adaptations in the organ structure that lead to the disease. This hypothesis has been confirmed subsequently in the laboratory animals. Offspring of malnourished pregnant animals showed permanent changes including increased blood pressure, abnormal glucose-insulin and lipid metabolism, all of which lead to heart disease and diabetes.

A recently published study also supports the hypothesis of Barker. Low birth weight babies have a higher risk of the heart disease in adulthood than those with normal weights, report a team of researchers at the Royal Free School of Medicine, London. Philipo Whincup and his team used ultrasound to study the arteries in arms of 333 children aged between 9 and 11. They found that the arteries of children who were born very small, were less able to dilate. They allowed more blood to flow through. Coronary arteries probably suffer the same fate, conclude the researchers. (Circulation , Vol 96, No 7).

The study of Barker's group suggests that mother's health should be improved before and during the birth for the long-standing welfare of the child from birth to death. Also, the cost of nourishing the pregnant mother is far less than the cost of taking care of such an undernourished kid to grow into a normal adult. And subsequently treating him for complications such as hypertension and diabetes in later life.

The benefits of spending a little money on the young mother thus outweigh the long-term loss. Nevin S Scrimshaw, a renowned nutritionist at the United Nations University, Boston, usa , says that for long and healthy life, good nutrition and life style are necessary throughout the life.