It's curtains on sound and light 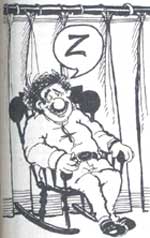 EGYPTIAN scientists Y I Hanna and M M Kandil of the National Institute for Standards in Cairo have designed and tested a double-layered curtain using local textiles which absorbs sound and light to a high degree, reports the Indian Journal of Technology (Vol. 30 No. 6).

Hanna and Kandil explained a material absorbs sound depending on how much friction "boundary surfaces", such as fibres and strands, can generate and thus convert sound into heat. Surface irregularities come in contact with the air set in motion by the sound wave. The air space between both the layers helps to absorb sound more efficiently.

The researchers found that the ability of the material to absorb sound increased with the number of layers, as well as with the increased porosity and thickness of the material. It decreased when only a single layer of cotton was used.

The Egyptian scientists assert their double-layered curtain is more effective, cheaper, healthier and easier to use than other common commercial, sound-absorbing acoustical materials.