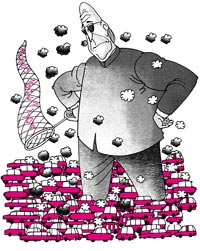 THE authorities are caught in a logjam. They cannot shy away from the challenge of restricting the use of dirty fuels, as it is no longer a 'mere plea' of a few civil society groups. Pointer to shallow policies, a report commissioned by the Union ministry of environment and forests (moef) proposes to combat air pollution through a harsh tax regime. It is for the first time that such radical recommendations are being considered by the government, much to the chagrin of the automobile industry.

The yet to be published interim report, 'A proposal to levy taxes on polluting input and output', was prepared by experts from Chennai-based Madras School of Economics along with researchers from National Institute of Public Finance and Policy, New Delhi. It once again confirms that pollution is always about taking hard decisions. One of its main proposals is to impose an ecotax on the purchase of private vehicles (cars, two-wheelers and jeeps) on the basis of their fuel economy. "Indian data as regards to the proportion of vehicular emission related morbidity, and its impact on health are insufficient. Therefore, a tax incentive structure has been formulated based on the ratio of fuel economy for different categories of vehicles complying with various Euro norms," the authors state.

The tax rate would depend on the 'resource tax factor' -- the more the factor, the higher will be the penalty. The 'factor' can be derived by dividing the best mileage of a mode of transport with a brand name's typical performance (see table: Double bonus). For instance, the best fuel economy of two-wheelers is said to be 70 kilometres (kms). Therefore, for a two-wheeler that may give a mileage of 40 kms, the resource tax factor would be 1.75. The tax would be imposed before levying excise duty on the vehicles.

Among all the modes of transport, the ubiquitous diesel vehicles will face the maximum regulatory butt if the recommendations are accepted. "The main concern is the greater pollution potential of diesel vehicles vis--vis petrol vehicles," states the report. It hits out at the price mechanism that gives undue advantage to diesel vehicles over their petrol counterparts. At present, diesel cars are more expensive than their petrol version. But the operational cost makes them a more lucrative investment. "The key factor responsible for the increased usage of diesel-powered vehicles is the difference in the prices of the two fuels." Diesel in Delhi, for example, costs Rs 19.08 per litre whereas petrol is priced at Rs 30.30.

As per the report, the present value of net savings from a diesel car (Tata Indica) over a period of 10 years is Rs 67,725, as compared to its petrol version. The sum is equivalent to 23.76 per cent of the ex-showroom price (Rs 2.85 lakh) of a diesel Indica. To neutralise the price advantage tilted in favour of diesel, the report recommends that an excise duty equivalent to the 'saving' should be levied on the diesel cars in accordance with the prevailing prices of fuel.

It is crucial to phase out diesel vehicles as they cause maximum damage to human health. "Information on the cost of emissions is not available for all pollutants. In context of India, some estimates of health costs of particulate matter less than 10 micron in diameters (pm10) are available. We thus take the emission of pm10 as the additional negative externality (impact of someone else's activities on others) from diesel vehicle vis--vis a petrol driven vehicle," mentions the document.

It not only holds diesel vehicles responsible for the emissions of pm10, but also suggests levying an annual emission tax of Rs 752 on a diesel car. The amount is an average of lower and upper limit of annual cost of pm10 emissions (income loss and medical expenses) from a diesel car.

Furthermore, till the 'artificial price difference' between petrol and diesel is removed, the government should levy a general tax on the purchase of diesel vehicles that would induce motorists to consider alternative fuels. Such a tax should be based on the average cost of diesel emissions borne by the society.

If the proposed recommendations are accepted, they could have far-reaching implications for the automobile industry and the environment. Major players such as Tata Engineering, Skoda and Fiat would be adversely affected, as they mainly rely on diesel models for their profits. "If the proposals are cleared, sales of diesel cars would plunge down. The whole incentive for owning a diesel car will be negated," admits a leading car dealer.

However, one should not hope against hope, considering the government's past record. "This is an interim report. Based on the discussions held in April 2003, the Madras School of Economics will submit a revised version after consulting different organisations," asserts K K Narang, economic advisor of moef. The situation will become certain in November 2003, when the final report is submitted.


At present, the major industry players refuse to comment on the proposals. Moreover, they are already trying to wriggle out of the far-away reality. "There has to be a clear distinction between conventional and the recently introduced clean diesel technologies. Both should not be treated similarly. The new one should be given incentives, as it is more ecofriendly," asserts V D Bhasin, vice-president of Hyundai.

As expected, the New Delhi-based Society of Indian Automobile Manufacturers (siam) has endless criticism in store. "Proposals should be based on the end-user objective, " asserts an official of siam. The organisation is particularly against fiscal measures based on fuel economy. "There are wide variations in fuel efficiency of the same model tested at different times due to inherent variations. The differences can cause the same model to frequently shift from one tax slab to another," says the official, adding: "The ecotax will encourage people to continue using their old polluting vehicles, instead of buying new ones. It is a must to use fiscal measures to phase out old cars."

According to the official, diesel is not more polluting than petrol as regards to the emissions of carbon dioxide, carbon monoxide and hydrocarbons. "There is no correlation between fuel efficiency and air pollution (except the emissions of greenhouse gases)," he asserts. Clearly siam is unsuccessfully trying to deny the harsh reality.

It even attempts to play down the threat posed by diesel vehicles. "European markets are steadily shifting towards diesel cars because of the inherent fuel efficiency, which leads to the conservation of natural resources and reduces emissions of greenhouse gases. Any additional tax on diesel vehicles, aimed at shifting the consumption from diesel to petrol, is not in tandem with energy conservation goals. The proposals run contradictory to the road map laid down by the 2002 Auto Fuel Policy Report," asserts siam.

It is yet to be seen whether the government will succumb to the pressure from the industry or not. The manufacturers will try to influence the policy, given the heavy tax burden the sector already bears. At present, the total incidence of taxes and other levies, including insurance and road tax, is 67.34 per cent of the total price of a car. The report includes a solution to the problem: "In case it is felt that the current tariff burden on automobiles is sufficiently high and further increase in taxes would be harmful for the growth of this industry, appropriate rebate in basic excise duty may be considered." All hopes for a pollution free future will be lost forever, if the officials dither now.