It's on the air

The new high speed radio network is set to take over the UK. its cheaper and more convenient, but watch out for the aesthetics 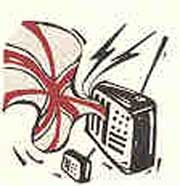 MILLIONS of pounds will be spent in the UK over the next three years on a new generation of high-speed radio networks that will provide super- highway services directly in offices and homes.

The systems mean that consumers and businesspeople can have access to the Internet and use high-speed digital communications without having to rely on existing British Telecom (BT) lines or those being installed by the cable-television companies. Instead, the telecommunications services will be made available through dishes mounted on the roof tops of homes and offices, though they will be smaller than those used for receiving regular TV channels.

The new networks would be built by three British telecommunication companies: Mercury, Ionica and NTI. Early in February, the UK department of trade and industry announced that these three companies had won a hotly contested auction of licenses to run a new breed of national wireless telecommunications network based on the 10 giga hertz frequency.

Nigel Playford, managing director, Ionica, says that the additional spectrum would enable his residential telephony firm to support high-speed, broadband remote access for consumers for many years to come.

"Essentially, it gives us the ability to offer the mass market computer-to- computer services," he says. It also means that Ionica has enough capacity to compete with BT in the residential market. Winning the extra band width means that lonica is now set to become a serious competitor in the residential telephony market that uptil now is dominated by British Telecom.

lonica's principle is simple. By offering a radio-based phone service, that will be received by small dishes on subscribers rooftops, lonica can cut out the need to Use BT'S phone lines. And, lonica claims, not only is the cost of building its radio network infinitely cheaper than the land- line ones being built by cable-TV companies, but the cost of maintaining the radio system is far lower, too.

Robin Schlee, access manager for Mercury, says winning the franchise means Mercury can provide access in the final mile to people's homes and offices much more cheaply than it would be possible otherwise. All three companies will also have to overcome cosmetic issues: will people accept what looks like a small satellite dish on their roof?