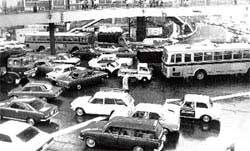 The government has planned to step up operations during 1998 to cut greenhouse gas emissions. For this purpose, the country is trying to develop greener technologies, conduct more experiments and attract investments from domestic and foreign business houses.

An action plan has been formulated by the government's environment agency so that greenhouse gas emissions could be reduced from automobiles. A scheme launched by the agency would aim at educating drivers to park their vehicles at lots constructed on the outskirts of cities. It would also encourage them to take buses and trains downtown on discounted passes.

A few European nations have already adopted the system. Before putting it on trials in some selected cities, the agency is trying to know how much carbon dioxide emissions could be cut after implementing the programme.

The Ministry of International Trade and Industry (miti), Japan, would focus on transferring energy saving technologies to developing countries. By the year 2000, these countries are expected to emit greenhouse gases at par with the developed countries.

Some technologies such as high-efficiency turbines for power generation and equipment for raising heat efficiency at factories are in the priority list of Japan's technology transfer programme. Apart from granting subsidies to universities and corporations for research purposes, the government has planned to increase subsidies for solar power in homes and raise tax breaks on purchases of electric cars and other vehicles.