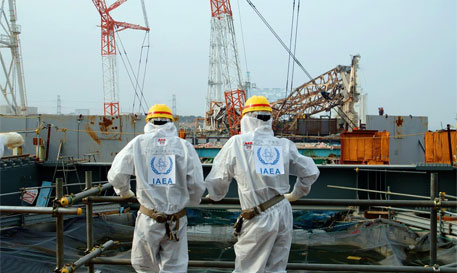 The International Atomic Energy Agency (IAEA) has applauded Japan’s efforts to decommission the TEPCO's Fukushima Daiichi Nuclear Power Station, which was responsible for the nuclear disaster in March 2011.

After reviewing Japan’s efforts, a 15-member IAEA team on Wednesday said “Japan has made significant progress”. “The situation, however, remains very complex, with the increasing amount of contaminated water posing a short-term challenge that must be resolved in a sustainable manner. The need to remove highly radioactive spent fuel, including damaged fuel and fuel debris, from the reactors that suffered meltdowns poses a huge long-term challenge,” said Juan Carlos Lentijo, team leader and IAEA director of Nuclear Fuel Cycle and Waste Technology. Japan decommissioned units 1-4 of the nuclear power station on 17 February 2015.

“The situation on the site has improved—progressive clean-up has led to reduced radiation dose levels in many parts of the site,” Lentijo said.

The team welcomed Japan’s decision to set up of the Nuclear Damage Compensation and Decommissioning Facilitation Corporation as a national authority to develop a guiding strategy for the decommissioning.

In its report, it said, “The creation in 2014 of a new branch of TEPCO, called Fukushima Daiichi Decontamination and Decommissioning Engineering Company, as the only responsible organisation for the safe implementation of the on-site radioactive waste management and decommissioning activities, is a good step forward to clarify responsibilities”.

The major challenges, according the team, is handling the persistent underground water ingress to main buildings and the accumulation of contaminated water on-site; and the long-term management of radioactive waste.

The IAEA team plans to deliver its final report to Japan by the end of March. The IAEA exercise was started on the request of Japan in September 2011.

“The path ahead is long, complex and challenging,” Lentijo said. “Japan is progressing step-by-step and plans are taking shape, which is a welcome development. It is important to maintain safety as the highest priority during all steps of the decommissioning of the site.”

The decommissioning of nuclear reactors and related environmental consequences