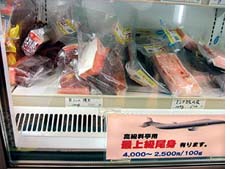 Two council members from the whaling town of Taiji, Japan, have come out publicly against the feeding of dolphin meat contaminated with mercury to children in school lunch programmes. It is the first time Japanese elected officials have criticised whaling and consumption of cetacean meat, and issued warnings of a potential public health disaster as the country attempts to boost domestic consumption.

Independents Junichiro Yamashita and Hisato Ryono from Wakayama prefecture recently announced laboratory test results of dolphin meat samples at a press conference. "We tested some samples purchased at the Gyoko supermarket in Taiji and Super Center Okuwa in the nearby city of Shingu," Japan Times quoted Yamashita saying. One dolphin sample had a mercury content 10 times above the health ministry's advisory level of 0.4 parts per million (ppm), while the methyl mercury content was 10.33 times over the ministry's advisory level of 0.3 ppm. Another dolphin sample tested 15.97 times and 12 times above advisory levels of total mercury and methylmercury, respectively.

Human nervous system is sensitive to all forms of mercury. Methylmercury and metallic mercury vapours are more harmful than other forms.

The news conference coincides with the annual dolphin hunt that begun in Taiji recently. Conservationists oppose this hunt--the largest kill of dolphins anywhere in the world. Every year, the hunt begins in September and continues for six months.