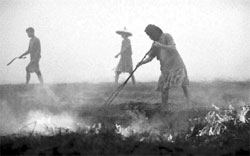 on june 10, 2002, the 10-member Association of Southeast Asian Nations (asean) signed the first ever agreement on transboundary haze pollution to deal with the recurring smoke and haze problem in their region.

The pact places the onus of taking concrete steps to curb smog from land and forest fires on asean member countries. The anti-haze agreement proposes setting up of an asean Coordinating Centre for Transboundary Haze Pollution Control. It also stipulates that a signatory country will assist transit of personnel and equipment through its boundaries to tackle fires in another country. Regions where the fire originates will provide information sought by another country hit by the pollution.

Besides adopting legal and administrative measures to implement their obligations, countries have been urged to enforce local laws to prevent the intentional burning of forests or land. Intensifying early warning efforts and surveillance programmes, considering banning open burning and setting up sub-regional fire-fighting arrangements are some other options cited in the agreement.

Since the haze incident of 1997 and 1998, officials from the region have regularly met to devise ways to prevent a similar crisis in the future. Although cosmetic measures were taken by these countries, their lack of preparedness came to the fore in March 2002 when a thick haze covered areas in northern Sumatra and Indonesia. At that time, the staff and equipment were woefully inadequate to combat the situation.

Apparently, the Southeast Asian nations have finally wised up and the anti-haze pact is the result of this wisdom. The agreement comes in the nick of time as a haze is expected to hit the region during the dry season between July and October because of the El Nino weather phenomenon.

Although the deal makes it compulsory for signatories to enforce measures to control the smog, it does not set down punitive sanctions for violators. Environmentalists see this as a lacuna of the pact. Their scepticism is justified: Jakarta has still not met many requirements of the 1997 Regional Haze Action Plan.