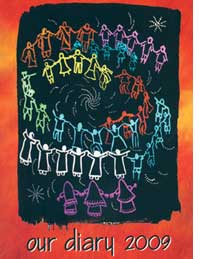 The mainstream media sees 2008 as a year of wars, terror strikes, financial meltdown. There is lip service to incidents of human rights violations. But 2008 was also a year of struggle. It was another year when common men and women registered their protest against untrammelled industrialization. This little diary by the Delhi-based ngo, Kriti, documents their struggle.

There is an account of Musahar struggle in Bihar. Chilika fishworkers share space with peasants from Nandigram and the dam-displaced from the northeast feature along with the incarcerated civil rights crusader Binayak Sen.

Now in its tenth edition, the diary provides updates from the movements featured in its previous editions.

There is a movements' map of India, which locates these struggles across the the country. So get this elegant diary and let your notes, thoughts and memories share space with accounts of people who have made a difference.