Fertilisers are leading to lower production of apples in Himachal Pradesh 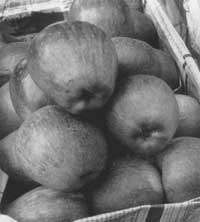 apple production in the state of Himachal Pradesh ( hp ) has dropped by 50 per cent in the last five years despite an increase of about 27 per cent in the cultivated area. The Himachal Fruit and Vegetable Growers Association ( hfvga ) says the rampant and unplanned use of fertilisers and insecticides is responsible.

"The assessed production of the present season may even go down to 100 metric tonnes, which shall be the lowest in the history of the state," says Rajpal Chauhan, official spokesperson of hfvga. The fertilisers commonly used include muriate of potash, ammonium nitrate and urea.

Etheral, an acid sprayed on the trees to get the glossy red colour, has also created problems. "It is very difficult to get good quality acid in the market", says Surinder Chauhan of the hfvga.The use of duplicate compounds freely available in the market has resulted in the fall of production of apples per tree, he adds. "The rate of both qualities of etherals is Rs 1200 to 2000 per litre and there is no agency to check it", he explains.

Rampant use of fertilisers has led to the reduction in beehives and populations of butterflies that are essential for pollination, says Sanjay Chauhan, general secretary of the hfvga. Metacid, an insecticide banned in several western countries due to its toxicity, is widely used in hp. Chauhan says companies manufacturing the insecticide are aware of its fallout but can't care less. He says heart ailments and diseases like asthma and skin allergies are linked to the excessive use of fertilisers.

The juice content of apples has also decreased considerably. Growers say that before chemical fertilisers became so popular, the shelf-life of the fruit and its natural shape, size and quality could be maintained at room temperature for six to eight months. But now, apples begin to rot within a month if not refrigerated.

Apple is a cash crop and grows only in the higher regions of the state where few other crops can be cultivated. This, along with the lure of ready cash for the farmers, has caused the rapid rise in the area under cultivation. The crop plays a very important part in the state's economy.

Apple cultivation is also supported by the state government which has provided subsidies on fertilisers. This has also led to the unrestricted use of the fertilisers.