Fast food from cafeteria worse than food which is simply oily 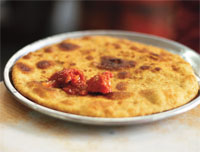 A COMMON argument of proponents of fast food is that such products are not very different from oily food made at home. But scientists at University of North Carolina’s Gillings School of Global Public Health in the US say eating oil-laden home made French fries and burgers is not the same as gobbling up the same food at your favourite fast food joint.

They studied the immune responses in rats to three types of diets—control diets, a lard-based high-fat diet and a cafeteria junk-food diet consisting of nutrient-poor snacks, such as salami, chocolate, cookies and chips. They found that a diet based on cafeteria junk food could lead to more obesity-induced inflammation (tenderness and swelling of fatty tissues) than a diet high in saturated fat.

The reason for this is that besides saturated fat, cafeteria diet contains saturated fat, trans-fats, sodium and cholesterol all of which are associated with increased risk of coronary artery disease, stroke and type 2 diabetes. Cafeteria food alters metabolites produced during the conversion of food to energy. One of these is metabolite lauroyl carnitine which could be responsible for obesity-induced inflammation and increased insulin resistance.

The researches suggest that cafetaria food should be used for modelling studies on obesity as they have more adverse effects. “Cafeteria diet is highly palatable—salty, fatty, sweet and has variety,” says Liza Makowski of the Gillings School, who led the study.

“It is well known that obesity causes inflammation that leads to diabetes, and this study has provided us with additional chemical clues or biomarkers that actually cause inflammation we can now study in human populations to better understand obesity and diabetes risk,” adds Makowski.

In India, too, the trend of eating out has been gaining popularity in the past few years. According to RNCOS, a marketing research firm based in Delhi, Indian fast food industry is expected to grow at a rate of 34 per cent during 2011-14. “While eating out with friends in a fast food outlet, we do not actually realise how much we are eating,” says Rekha Sharma, former chief dietician at All India Institute of Medical Sciences and director of Diabetes Foundation of India, a non-profit based in Delhi.

As a result, over the years, increase in cases of obesity and diabetes has been observed in India, too. According to the International Diabetes Federation, India was home to 61.3 million of total 71.4 million diabetes patients in Southeast Asia in 2011. An estimate by the National Family Health Survey in 2005-06 showed that 14.8 per cent women and 12.1 per cent men were either obese or overweight in the country.