Just a radio signal to whisk you to office

The concept of teleportation or moving people and objects instantaneously, which was made popular by the American serial Star Trek, is now entering the domain of reality. 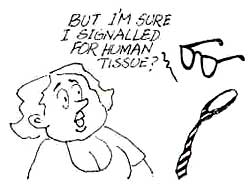 INSTEAD of taking a bus or car to your place of work, you may soon be considering teleportation. The idea of moving people and objects instantaneously from one spot to another is no longer just science fiction, suggests a group of US theoretical physicists (Physical Review Letters, Vol 70, No 12).

Teleportation is based on the idea that a physical object is equivalent to the information needed to construct it. By transmitting this information to a distant place, through a phone call or radio signal for instance, the object can be reconstructed as in a fax message.

But in a fax message, the accuracy with which the reconstruction occurs is limited and letters often appear blurred. To produce an exact replica of an object, one needs to provide complete information about every subatomic particle composing it.

However, according to the uncertainty principle, a key feature of quantum physics, the observation of one characteristic of a subatomic particle such as its position, spin or momentum, alters its other characteristics. As a result, reconstructing a particle from its specifications seemed a remote possibility.

Now, Charles Bennett and his colleagues at IBM have circumvented this problem using what is called an Einstein-Podolsky-Rosen (EPR) pair of particles. The particles in an EPR pair are so intimately related that a measurement on one of them can fix a property of the other particle.

The method of Bennett and his colleagues involves making a measurement on one of the EPR particles and the particle that needs to be teleported. This information is then used to transform the other EPR particle into a replica of the original particle.

To be able to teleport a large object like a human being, however, one needs to transmit complete information about each of the billions of particles that compose the body. Thus, even if teleportation is possible in principle, many difficulties have to be resolved before it becomes a practical way of going to the work.