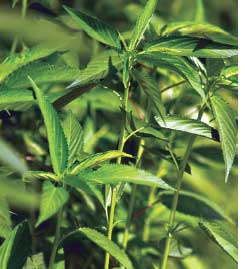 The bond between jute and Bengali culture grows stronger with evidence of anti-oxidant properties in jute leaves. Jute saag  mops up arsenic toxicity that plagues hundreds living in the Gangetic delta of West Bengal and Bangladesh, claimed a joint research team from West Bengal and Assam.

The anti-arsenic drugs that are available tend to manifest more harmful effects than remediate. Studies show leaves of tossa jute (Corchorus olitorius) possess antimicrobial and anti-cancer activity. The researchers tried to extend this application to arsenic.

Experiments were carried out with five groups of rats which received varying quantities of aqueous tossa leaf extracts prior to arsenic exposure.

Levels of free radical-scavenging enzyme dropped below normal on arsenic exposure. The jute leaves restored the activity of the enzymes.

Treatment with the jute leaves prior to arsenic exposure also fortified the body against dna damage, claimed the study published in the January issue of Food and Chemical Toxicology. “The protective effect of jute leaves may be attributed to substantial quantities of phytophenolics,” said lead researcher Saikat Dewanjee from Jadavpur University in Kolkata.

Anisur Rahman from the department of zoology at Kalyani University in West Bengal has his doubts: “The research does not suggest how much of the arsenic was deposited in different tissues of the rats and how much excreted.” “No light was shed on the plant extract’s ability to bind with arsenic facilitating its removal. This study is preliminary in nature,” he added.