Kathmandu struggles, damage in remote areas not fully known yet

Survivors are in immediate need of food, safe water and medical supplies 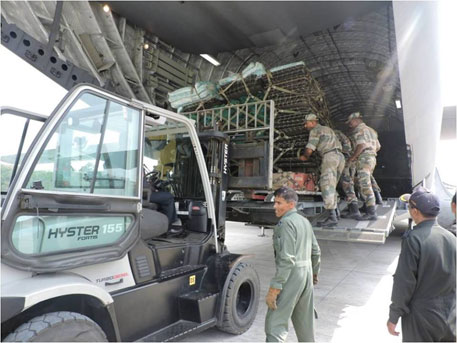 As rescue workers continued to look for survivors buried under the rubble, Nepal Prime Minister Sushil Koirala told Reuters that the death toll in Saturday’s deadly earthquake could reach 10,000. Almost 4,350 people have been killed and more than 7,000 injured, according to latest information from the Nepal government.

All climbers who were stranded at different camps up the Mount Everest have been airlifted to safety, a Reuters report said. More than 1,000 climbers, including 700 local sherpas, were on the mountain when the earthquake and avalanche struck.

The United Nations estimates that the earthquake may have affected the lives of as many as eight million people in the region. A UN report said two million people in 11 districts are severely affected. An update by Médecins Sans Frontières (Doctors Without Borders) on ReliefWeb said areas outside Kathmandu are accessible only by helicopter and teams are still assessing the situation in remote and isolated areas. From the first aerial assessments, the damage seems “quite significant” in many villages in the mountains, the update said.

With their homes destroyed or damaged, people continue to sleep in the open for the fear of being caught under a collapsing building in the event of strong aftershocks. Even as aid agencies rush supplies and relief material into the country, people have limited access to safe water and sanitation. More than 1.4 million people are in need of food assistance, according to the UN report. Power supply also remains disrupted.

India has evacuated 5,400 of its citizens from Nepal so far. Teams of India’s National Disaster Response Force are participating in the search for survivors. Teams of army doctors to treat the injured and those of Power Grid Corporation to restore power supply have also reached Nepal.

In addition to international aid agencies, China has also sent teams to help with rescue and relief efforts.