Following up on sustainable development summits 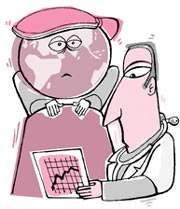 at the recently held meeting of the 11th Commission on Sustainable Development (csd-11), a roadmap was charted to monitor the progress of commitments made during last year's World Summit on Sustainable Development (wssd) in Johannesburg, South Africa. The csd-11's meet took place at the un headquarters in the us, from April 28 to May 9. It was arguably the first serious follow-up to track the implementation of the wssd outcomes. The commission's strategy now includes comprehensive stocktaking of pledges made in the last two summits also.

csd-11, the apex intergovernmental body for sustainable development, has agreed on a strict timeframe to carry out the review and make further policy suggestions. For this, it has evolved a series of two-year, action-oriented, cyclical sessions called the 'Implementation Cycles'. These comprise a 'Review Session' in the first year and a 'Policy Session' in the second year. Each 'Implementation Cycle' will address a certain set of related issues, grouped into 'thematic clusters'. The first cycle would start from 2004 and discuss water, sanitation and human settlements. Altogether there would be seven cycles from 2004 to 2017, and the overall implementation assessment would be completed in the last phase.

In the first year of each cycle, csd-11 will conduct the review exercise covering all previous summits -- from the first in Rio de Janeiro, Brazil, to the latest in Johannesburg. In the second year, the committee will discuss policies and possible actions to address constraints in the implementation process.

But in crosscutting issues, the monitoring of implementation of commitments would continue throughout its seven cycles. Such issues include poverty eradication, changing unsustainable patterns of consumption and production, protecting and managing the natural resource base of economic and social development, and means of implementation.

In another major development, the csd has defined and established rules for public-private partnerships (popularly known as "type-2" initiatives at the wssd). Aggressively pursued by the us, partnerships entail alliances between various interested parties -- public or private -- towards the implementation of wssd outcomes. It was portrayed as a parallel track of implementation and many countries, including India, saw it as a threat to the un's multilateral character. To date, these initiatives were neither monitored nor regulated.

Consequently, members have come up with qualification rules for this category and also its monitoring. Clearing confusion and apprehensions, csd has reiterated that partnerships would supplement implementation of wssd commitments and are not a substitute for them. The meeting has stipulated that only new initiatives -- not just existing agreements repackaged as new -- that add value to the implementation process would qualify as type-2. India, in fact, was instrumental in bargaining these criteria. "It was the only country screaming for streamlining partnerships," discloses a senior negotiator. According to members of the Indian team, it held a series of bilateral meetings with other countries, particularly the us, before the meeting on partnerships. And the results are quite apparent.