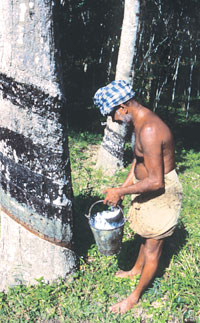 KERALA has challenged the Genetic Engineering Appraisal Committee’s (GEAC) decision to allow open field trials of genetically modified (GM) rubber in the state. GEAC, the country’s apex body that approves release of GM crops, had given a go-ahead to the Rubber Research Institute of India (RRII) to carry out the trials in Chetchackal, Thombikandom in Kottayam.

“The Supreme Court had directed GEAC to seek permission from the state government, the local government and farmers before permitting any GM trials,” said Kerala agriculture minister Mullakkara Retnakaran. But the directions were ignored by GEAC while giving approval in a meeting held on November 15.

In his letter dated December 2, the agriculture minister asked Union environment minister Jairam Ramesh to revoke the approval and not allow any field trials without prior permission of the state. “We have already stated to the Central government that Kerala wishes to remain a state free of GM crops. This is not only to protect its agriculture, but also its agro-biodiversity and the highly pristine and valuable biodiversity,” the minister write.

According to RRII, GM rubber plant has certain genes about which even scientists are apprehensive. Some of these genes are the MnSOD gene construct, which has CaMV 35 S promoter (from virus) and NPT II Kanamycin resistance and GUS reporter genes from E Coli.

“Rubber seeds are used in the production of cattle feed. Rubber treebased honey is also consumed on a large scale in Kerela. Therefore more clarity and scrutiny is needed before proceeding with the project,” Retnakaran told Down To Earth. In 2007, Andhra Pradesh had reported cattle deaths after grazing on Bt Cotton farms.

“We are not against biotechnology or research in genetics, but we will not permit open field trials of GM crops until all biosafety concerns in this respect are addressed both at social and scientific levels. In case of endosulfan, Kerala has already paid a social price and does not want any other catastrophe to happen,” he added.

Shalini Bhutani, a legal expert working with international non-profit GRAIN, said the eleventh schedule gives the government the right to decide what to grow. Besides, Kerala is amongst the few states which has set up biodiversity management committees under the Biological Diversity Act, 2001. These committees facilitate local-level decision making on use of biological resources in their area and can play a crucial role on defending the state government’s stand.

But, the Indian Rubber Growers Association (IRGA) has supported the GEAC approval for GM rubber. At a time of rubber shortage, there is no option but to go for such experiments, an IRGA member said. Technological upgrade and keeping pace with the changing times are absolutely essential when the country targets to meet the demand of 1.5 million tonnes of natural rubber per year, he added.