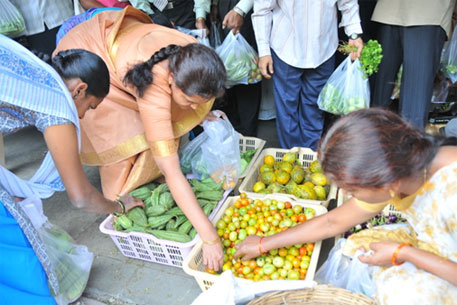 Kerala will soon set up a new authority under the food safety commissioner to screen fruits and vegetables entering the state's markets for pesticide contamination. The authority will have to ensure that food safety standards are met.

At a meeting of ministers and officials in Thiruvananthapuram on November 18, Chief Minister Oommen Chandy said stringent measures will be taken against those who indulge in contamination of fruits and vegetables with pesticides and other chemicals.

He also said that there have been many complaints against the practice of applying pesticides to fruits and vegetables sent from Tamil Nadu, Andhra Pradesh and Karnataka. Fearing its impact on food safety in the state, Chandy has urged state officials to strengthen field inspection while checking pesticide levels.

"The results of inspection must be made public. People must be alerted against using such vegetables. There must also be inspections at check-posts," the chief minister said.
Deficit in production

According to state-owned vegetable procurement agency Kerala Horticultural Products Development Corporation (Horticorp), the state requires 30 lakh tonnes of vegetables every year. "However, the state produces only 40 per cent of its requirement and imports the rest from neighbouring states," Lal Varghese Kalpakavadi, chairman of Horticorp, told Down To Earth.
He points out that chemicals are often applied to vegetables and fruits that are sent to Kerala in order to enhance their shelf life and attributes the state’s high incidence of cancer to this practice.

In 2008, Kerala had formulated an organic policy "for making farming sustainable, rewarding and competitive and ensuring poison-free water, soil and food for every citizen". With increasing awareness among consumers about the harmful effects of pesticides, there is high demand for organically cultivated produce. "Therefore, it has become a solemn responsibility of the government to encourage organic farming to ensure poison-free food at affordable price to every citizen," the policy says.

"The state has, however, failed to take effective measures to implement its organic policy," says Kalpakavadi. According to him, farmers are not advised about the importance of organic farming. Nor are they encouraged to practise green farming without losing their yield.

"For farmers, farming is their livelihood and they use chemicals to increase yield and profit," he points out. “They will be ready to abandon chemicals only if they are compensated for the possible loss in yield. Besides, the state will have to focus on livestock development and green manure production if it wants good vegetables without pesticides," Kalpakavadi adds.

While the screening authority is a checking process, the state will have to become self-reliant in the production of fruits and vegetables. The state agriculture department will have to formulate a comprehensive plan, taking into account the role of its 1,050 krishibhavans.

Kerala Agricultural University (KAU) has informed the government of its willingness to reduce the fee of screening vegetables and fruits for pesticide residue at its laboratory at Vellayani in Thiruvananthapuram. The Pesticide Residue Research and Analysis Laboratory at the College of Agriculture will screen samples provided by the new authority.