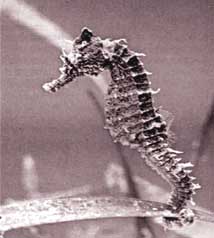 among the 30 to 40 species of seahorse identified worldwide, many face an uncertain future due to the increasing numbers claimed by traditional medicine, pollution and habitat loss. It is estimated that at least 20 million dried seahorses are sold every year for traditional Chinese medicine and as curios, while hundreds of thousands more live seahorses enter the aquarium fish trade each year. A survey conducted by the Seahorse Nature Aquarium in the uk suggests that the demand for seahorses has soared in response to China's rapid economic growth. Used to treat ailments ranging from asthma and arteriosclerosis to impotence and incontinence, seahorses are highly valued. They are also victims of the destruction and degradation of seagrass, mangroves and coral, which comprise their habitats ( Marine Conservation , Vol 3, No 9).

Seahorses are found in most temperate and tropical coastal seas. There are two different species of seahorse: Hippocampus remulosus and Hippocampus hippocampus . Both are voracious predators of small shrimps and prawns, consuming upto 50 per adult per day. With a length of 15 cm from top to tail, seahorses are easy to identify with their bristling manes of appendages, dark, almost black face and a body colour that ranges from grey/black to an olive brown.

Unfortunately, their biology makes seahorses quite vulnerable to fishing pressure because like many other inshore fishes they have low reproductive rates and very structured social and spatial patterns that are easily disrupted. A rather unique feature about the species is that it is the males that get pregnant. The female transfers eggs to the male's brood pouch, where they are fertilised. The embryos are then protect ed, given oxygen and nourished until the male goes into labour to release the offspring. Such a system of reproduction does hold relevance for the conservation of the species because the male can produce only a few offspring after each lengthy pregnancy.

Their resilience to exploitation is also limited by the practice of monogamy whereby one male and one female mate repeatedly and exclusively. If one were to die or vanish, the surviving partner takes time to find another mate because they are not very mobile creatures. For the same reason, it could take rather long to recolonise areas that have been depleted of seahorses.

The current levels of exploitation cannot be sustained. Seahorse populations are declining by as much as 50 per cent over five years, in the case of some fished populations. Moreover, seahors es are getting smaller in size, so every kilogramme of dried seahorse now consists of more animals. The demand is such that even juveniles now find ready markets.

Although the animals are in urgent need of being conserved, investigators believe that a total ban on seahorses is unlikely to prove practical at present, because too many people depend on them for their livelihoods and on medicines derived from these. Instead, all that could be aimed at is a reduction in demand. Also, alternative remedies in Chinese medicine that do not require the use of threatened animals and plant species could be promoted. Adoption of more selective fishing practices that do not net juveniles or pregnant males and increasing the number of seahorses through captive breeding and aquaculture are yet other recommendations.

Meanwhile, field projects in the Philippines and Vietnam being sponsored by the Zoological Society of London -- that are developing such diversified approaches to seahorse conservation and management -- are coming up with early and encouraging results.