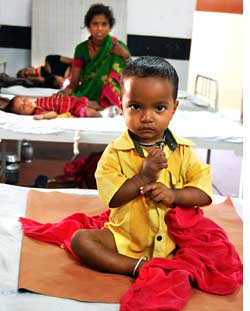 FOUR infants died after being administered measles vaccines in Waghola village of Aurangabad in Maharashtra, while another six were in critical condition. The vaccination campaign was organized by the state government at the village anganwadi on September 26.

Soon after the health workers from the Jategaon health centre in Phulambri tehsil left after vaccinating 10 infants, the babies started having loose motion, vomiting, fever and breathing difficulty. At first, it seemed to be 'normal' symptoms associated with vaccination. Nandabai Gaikwad, a resident of Waghola, said, "We took the children to a nearby private hospital in Phulambri but were advised to rush to the government hospital in Aurangabad. By then the condition of the children had turned serious and four babies died the same night."

The villagers are angry. "In future we will think twice before giving any vaccine to our children," said Sharda Gaikwad, sitting beside her 12-month-old child at the hospital. The government dismissed five health officials following the incident, a move criticized by health experts. "The health workers were not at fault as they followed a proper procedure. There must have been some fault with the vaccine. Recently, some babies in Ukraine died after being vaccinated. Those vaccines were exported by India. In the us, faulty vaccination means the government has to pay at least Rs 2 crore to the victim's family. And see what we do in India; dismiss some junior health workers," a doctor told Down To Earth on the condition of anonymity.

While the exact cause of deaths is yet to be determined, the department has confiscated the remaining batch of the 4,000 vaccines manufactured by the Pune-based Serum Institute of India and ordered local and central level enquiries into the incident.

Five months ago four children had died in Tamil Nadu after being given measles vaccine manufactured by another company.