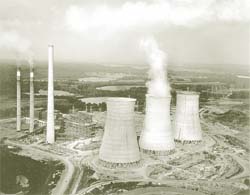 fine-particle pollution from power plants, especially those using coal, is responsible for the death of 30,000 people every year in the us . This was stated in a report entitled Death, Disease and Dirty Power prepared by Boston-based Clean Air task Force, an environmental group. The group is campaigning for tougher laws regarding air pollution. Cities with large populations living near coal-fired power plants have much higher death rates than areas with few or no coal-fired plants, the report states. "Around two-thirds of the deaths due to fine particle pollution can be avoided by implementing policies that aim at bringing down sulphur dioxide and nitrogen oxide emissions of power plants," the report states. Research indicates that people are dying months or years earlier because of pollution caused by the power plants. Many cases of cardiac and respiratory problems have been reported from areas located near the power plants. The claims of the report has been refuted by officials. They say that sulphate, which is the main component of fine-particle pollution, has minimal impact on public health.