Kills more than the pain 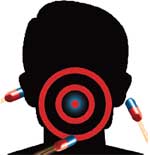 IMAGINE pain without painkillers around. Aspirin was the first such drug synthesized by Carl von Gerhardt in 1853. The name was patented by Bayer Company in 1899. John Vane was awarded the Nobel Prize in 1982 for explaining its mechanism.

“A doctor prescribes painkillers and anti-inflammatory drugs as the first step to treatment nowadays. Stress, improper lifestyle and easy availability of the drugs have led to increased dependence,” said Mallikarjun Yadavannavar, associate professor at B M Patil Medical College in Karnataka. The side-effects of these drugs have also risen. Stomach ulcers were always there; researchers reported hearing loss in men on March 1 in the American Journal of Medicine.

Epidemiologists from the Harvard School of Public Health in Boston, USA, studied the association between hearing loss and use of aspirin, anti-inflammatory drugs and acetaminophen (for reducing fever) in 26,917 medical professionals aged 40-74 years in 1986. The people were enrolled in the “Health Professionals Follow-up” study started in 1986 by the National Institute of Health and the Massachusetts Ear and Eye Foundation in the US. The participants were contacted every two years for a follow-up. Up to 3,488 cases were reported. The team found consuming painkillers more than twice a week increased risk of hearing loss, particularly in people below 60 years.

“We examined regular use of moderate doses of the analgesics,” said lead author Sharon G Curhan from Brigham and Women’s Hospital in Boston. Use of painkillers is rampant in India. “It is a Rs 3,511-crore market with a double digit growth of 16 per cent per year,” said Sameer Kabre, market researcher from Mumbai. “Consumers also have varied choices in the type of drug (aspirin, acetaminophen, ibuprofen) and strength (low, regular, extra strong),” said Satnam Arora, pharmacist in London. In the US 81 per cent households buy analgesics 4.2 times a year, reported market research company AC Nielsen from New York, USA.