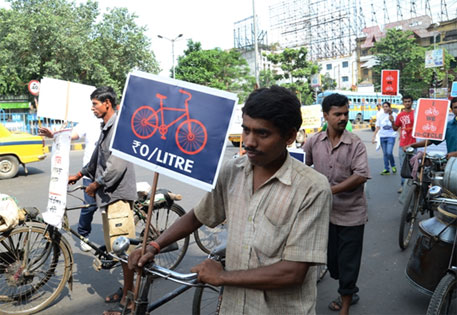 Last Sunday, a crowd of about 200 gathered in the heart of Kolkata to protest the city administration's clampdown on cycles. Avid cyclists complete with head gear came holding placards that said “let’s re-cycle Kolkata”. They were joined by milk vendors, vegetable vendors and newspaper delivery boys for whom cycling is tied to earning a living.

Krishnalal Ganguly, a book supplier who rides between 30 to 40 km everyday on his cycle, said, “I have been fined 14 times in the past two years. On each occasion I had to pay Rs 100 to save my cycle from being seized.” Prashanta Purakayit, who works as a pest controller complained that cyclists are “regularly showered with abuses, cycle tyres are punctured with knives, and materials on the carrier thrown away.” The milk vendors are treated the worst. “They fine us between Rs 200 to Rs 300. We have no option but to pay up, else the plainclothes policemen throw the milk or make us wait. Delay means the milk will be spoilt,” said Anil Yadav.

The Kolkata traffic police, in an order from 2008, prohibited cycling on 38 major thoroughfares. Despite earlier protests by cyclists and environment groups, more roads were added to the list. In June 2013, it published a gazette notification prohibiting cycles on 174 roads. While on some roads cycling is prohibited altogether, in most cases cycles are not allowed to ply between 7 am and 11 pm. 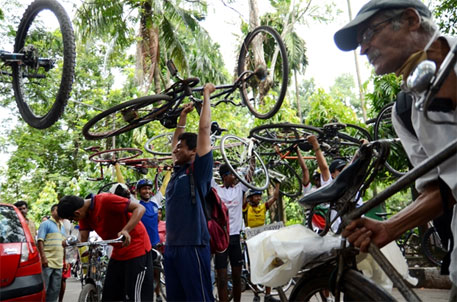 Alongside cycles, the new notification prohibits all forms of non-motorised transport like tricycles, vans, hand and pulls carts. The notification restricting “slow vehicles” was issued by the Kolkata Police Commissioner Surajit Kar Purakayastha “with a view to provide safe and uninterrupted flow of vehicular traffic”. There is no provision of fines or seizure in the notification, implying the penalties collected by plainclothes policemen are illegal.

The cycle ban makes little sense for Kolkata, for it is the only Indian metro where trips by cycle outnumber trips on cars. Only 1.5 per cent of road accidents happen because of fault of cyclists compared to 71 per cent due to drivers of motor vehicles. Cycles remain a vehicle of choice in a city that has the least amount of road space and low ownership of private cars. The Kolkata traffic police’s contention that cycles slow down vehicular traffic also doesn’t hold ground: the average speed of traffic in Kolkata varies between 14 to 18 km per hour.

Vinay Jaju from Switchon, the non-profit which organized the “cycle satyagraha”, said, “we want to engage with the authorities to make them understand that cycles are integral to sustainable urban transport. If everything fails we will go to the courts.”

Shyam Mandal, a cyclist, came to the demonstration with map of Kolkata marking roads wide enough to create cycle lanes. “If police can allow side parking for cars on busy stretches, why not separate lanes for cycling?” he asked.

The protesters, silently walked with their bicycles, from the point of assembly at Chowranghee square to the press club, a distance of about 2 km, escorted by the police. The stretch is one of the main thoroughfares in Kolkata where cycles are not allowed between 7 am and 11 pm.

Later, the cyclists signed a petition for submission to the chief minister. It urged Mamata Banerjee to revoke the ban and set up a cell to promote non-motorized transport in Kolkata. “We have tried to reach out to the authorities concerned but have been unsuccessful and now seek your leadership in the matter. You have inspired Kolkata and won hearts with your motto of “Maa Maati Manush”. Cycle is a perfect manifestation of your slogan and vision - since bicycles and non-motorized transport are socially inclusive, directly support livelihoods, are inexpensive, take much less space, are good for the environment and health, and are least likely to cause jams and accidents,” reads the petition.

At the protest venue, many had scribbled on a white canvas. Some messages were hopeful: “paddle into a green future” and “burn more calories than cash”. One asked, “what next, ban pedestrians?” 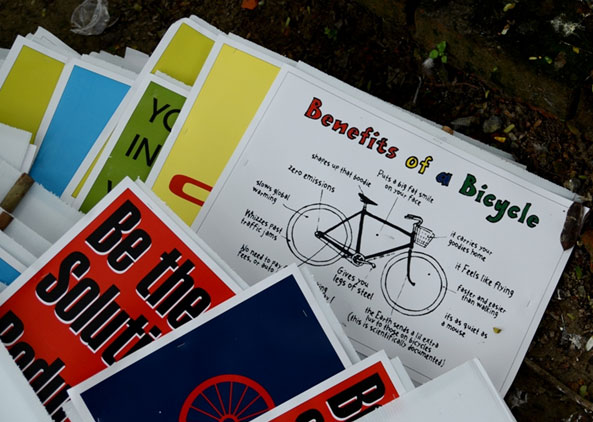