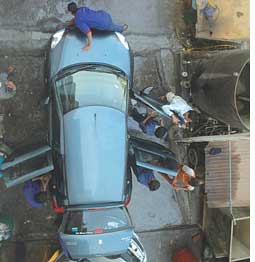 AFTER years of prolonged inter-ministerial battle, the Centre recently reached a consensus to have mandatory fuel economy standards and a labelling programme for cars to improve their fuel efficiency. The conflict was on what would be the nature of the regulations and who would be responsible for assigning the rules. The car industry was also opposed to mandatory fuel economy standards. The consensus was reached only after interventon from the Prime Minister's Office (pmo).

After rounds of meetings with the ministries concerned, the pmo decided to support mandatory fuel economy standards and fuel efficiency labelling for cars to strengthen India's energy security. The Bureau of Energy Efficiency (bee), an autonomous energy regulator under the Ministry of Power, will develop the standards and labels.The Ministry of Shipping Road Transport and Highways (mosrth) will enforce these regulations.

This helps to resolve the turf war that saw multiple ministries working simultaneously to develop these regulations. bee worked on fuel economy standards within the ambit of the Energy Conservation Act 2001 that provides for energy regulations. Not willing to lose control over these regulations, the mosrth tried to develop carbon dioxide (CO2) emissions standards as a proxy for fuel economy regulations. Its powers under the Central Motor Vehicle Act 1988 do not include direct regulation of fuel consumption in vehicles. CO2 emissions depend on the amount of fuel burnt.

The matter became more complicated as the car industry lobbied hard to keep the regulations voluntary, avoid direct regulation of fuel consumption in km/litre, and have CO2 emission standards. The industry feared if fuel economy was regulated in km/litre, it would make the mileage of cars less ambiguous and the consumers would react if there is any variation from the stated limit. This would increase the risk of liability and litigation. At present consumers learn of a car's fuel consumption rate informally.

Industry, however, ignored the fact that globally, fuel economy standards were not meant to be absolute but a benchmark for technology improvement and an instrument to influence consumer choice. The industry has been facing severe public criticism for not sharing fuel economy data of their car models with the consumers.

The industry even wanted the regulations designed along the lines of European standards for CO2 emission. This system sets the standard as an average fleet-wide improvement target that can be met by mixing models of varying fuel economy levels. This would help the car industry to escape a more strict system in which each vehicle model needs to comply with the standard and avoid the risk of some models going out of the market.

The pmo did not entertain the CO2 approach in the meeting chaired by the principal secretary to the prime minister on October 3, 2008. It was decided that the fuel economy standards and labelling should aim for saving energy and informed consumer choice.


Some car manufacturers including Maruti Udyog Ltd, Hyundai and Toyota see an opportunity in the fuel economy standards and labelling programme. When the Society of Indian Automobile Manufacturers, an industry body representing 44 companies, finally announced the voluntary declaration of the fuel economy scheme from January 2009, Maruti took the lead to display fuel economy levels, much before the rest of the industry.

I V Rao, technical director of Maruti Udyog, said, "Realities of the market are such that consumers have a strong interest in fuel efficiency. The industry will have to respond to that. These regulations have advantages." But the heavier vehicle manufacturers, especially of sports utility vehicles or suvs, are more cautious. "If the government comes up with mandatory fuel economy standards, we will abide by it," said Debasis Ray, head of corporate communications, Tata Motors.

The fuel economy regulations will go a long way in strengthening India's energy security. Fuel efficiency improvement by 50 per cent by 2030-31, as envisaged by the Integrated Energy Policy, amounts to 65 per cent of the current oil consumption. In terms of CO2 emission, this equals taking off the roads seven million of today's four wheeled vehicles.