Labels must for GM food 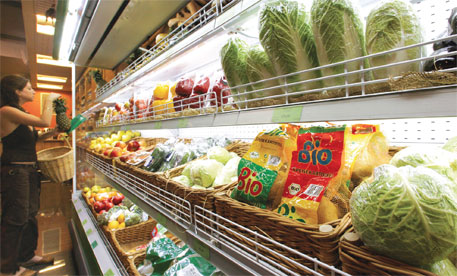 INDIA MAY NOT have started growing genetically modified (GM) food crops, but it does import food products that contain GM ingredients. Consumers who buy them have no way of knowing what they contain. Recently, the department of consumer affairs under the Union food and consumer affairs ministry decided to take a corrective measure to help consumers make an informed choice. It mandated that all packaged food products containing GM ingredients should carry a GM label from January 1, 2013.

The department notified 19 commodities to be covered by the new labelling rule under the Legal Metrology (Packaged Commodities) Rules. These include baby food, biscuits, breads, edible oils, milk powder, cereals and pulses. “Every consumer has a right to know what kind of food he or she is eating, and with the controversy over health impacts of genetically modified food, labelling becomes all the more important,” says B N Dixit, director (legal metrology) with the department of consumer affairs.

But how will the new rule get implemented? The consumer affairs department deals only with packaging, and weights and measures. Dixit says it is for the Food and Safety Standards Authority of India (FSSAI) to decide what information should be displayed and in what manner. FSSAI was mandated by the Food Safety Standards Act of 2006 to regulate GM food and draft regulations for labelling food containing genetically modified organisms (GMOs). These have not been finalised till date. 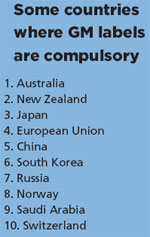 In 2010, FSSAI had prepared an interim regulation—Operationalising the Regulation of Genetically Modified Foods in India. It says that to manage the regulatory programme for GM foods, FSSAI would establish a new secretariat—GM Foods and Food Safety Assessment Unit (GMFSAU). It would have a multi-disciplinary team of scientists trained in safety assessment.

This unit would assess and decide whether the GM event (gene insertion) for which approval is sought can be considered as safe as non-GM food. The report of GMFSAU would then be reviewed by FSSAI’s expert committee on GM foods, which would also oversee the public consultations process before giving its recommendation (see diagram).

But this interim regulation may end up as an exercise on paper. Mohanty says the department of biotechnology has since mooted the Biotechnology Regulatory Authority of India (BRAI) bill for a single regulator for genetically modified food. Since BRAI has come into picture, it is yet to be made clear who will regulate GM food.

The food processing industry, meanwhile, is clueless about what needs to be done before the approaching deadline of January 1. Industry sources say they cannot act unless they get clear instructions. Dixit blames FSSAI for the situation, saying the consumer affairs department had given it more than six months to formulate regulations.

“Our department plans to hold public awareness campaigns through advertisements about GM labelling and we’ll be at work from January 1,” he says. The consumer affairs department has powers to penalise violators and seize consignments of their products.

The one-line rule notified by the consumer affairs department has baffled activists, too. The glut of imported food products is from countries that do not follow GM labelling standards, like the US and Canada. There is no way of tracing the origin of these and indigenous food products, and this is one of the biggest hurdles in implementing a GM labelling regime.

“How will the consumer affairs ministry hold companies and brands liable when there is no system of trace-back (of ingredients used in a product)?” asks Shivani Singh, campaigner for sustainable agriculture with non-profit Greenpeace India. The ministry needs to flesh out the notification to meet the desired objective, she points out.

She says the authorities should adopt zero-tolerance for GMOs that have not been approved for commercialisation in India. “Any traceable amount of GMOs (>0.01 per cent) should be reflected on the packages,” she says.

Kavitha Kuruganti of Alliance for Sustainable Agriculture says the new rule has addressed one aspect of the problem relating to packaged foods. “But the question is how labelling can be implemented when most of the consumption is of food sold in loose form.” She says not a single case has been registered so far against importers of products containing GM ingredients like corn, canola and soy, and there is no system for segregating such products.

She cited the example of import of 64 kg of pickles from Japan, containing GM corn and soy, by a Japanese restaurant in Delhi in 2009. A civil society organisation had complained but the case was never taken to its logical end, says Kuruganti. At present, about 40 countries have the GM labelling system, either mandatory or voluntary (see list).

A major constraint in implementing the GM labelling regime in India is shortage of laboratories equipped to test food products for GM ingredients. There are just a handful of them, like the Central Food Technological Research Institute (CFTRI) at Mysore, Centre for DNA Fingerprinting and Diagnostics at Hyderabad and the National Bureau of Plant and Genetic Resources in Delhi.

A senior official with the department of consumer affairs says upgrading lab facilities will be considered once the practice is established.

Scientists add that DNA-based methods for testing genetic modification are expensive and tedious, requiring highly skilled, trained personnel. Scientists at CFTRI-Mysore say that every company is developing its own genetically modified crop with different genes because of which there is no universal and precise method to detect GMOs. For example, in herbicide tolerant soy (GM soy), two different genes confer resistance to glyphosate and glufosinate, commonly used herbicides.

So, for genetic testing of soy, scientists need to set up different protocols and optimise and standardise procedures for identifying promoter genes that regulate the expression of neighbouring genes. Thus, testing for GMOs needs to be on case-to-case basis. Scientists also enumerate difficulties in obtaining samples of crops like GM soy seed or seed powder from which DNA is to be extracted. These are required to ascertain whether the testing procedure is correct. Effective and efficient sampling plans are needed to get the most representative sample.

The procedure for importing samples of modified and unmodified crops or food stuffs requires clearances from various ministries, beginning with application to the Institutional Biosafety Committee. Once this approval is granted, an import licence and approval is required from the Directorate of Plant Protection, Quarantine and Storage under the agriculture ministry. After this, the developer firm has to be approached for seed and leaf powders—and the firm can easily turn down the request. A German company, FLUKA, supplies “certified reference materials” of a few GM crops, but at a high cost of Rs 6,000 to Rs 8,000 per gram.

Scientists add that in processed food, DNA degradation is very common, and therefore the methodology has to be modified and optimised by simulating processing operations, such as baking and autoclaving.

The absence of a sound regulatory and enforcement regime means consumers may not really have a choice over what they eat even after the new labelling rule comes into force.

Draft on operationalizing the regulation of genetically modified foods in India

GMO myths and truths: an evidence-based examination of the claims made for the safety and efficacy of genetically modified crops