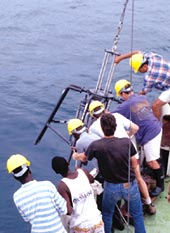 rising temperature is adversely affecting fish and algae populations of a lake that is an important source of freshwater and food for East Africa. This is the finding of a study conducted by Catherine O'Reilly of Vassar College, usa; Andrew Cohen of the University of Arizona, usa; Simone Alin of the University of Washington, usa; Pierre-Denis Plisnier of the Royal Museum for Central Africa, Belgium; and Brent McKee of Tulane University, usa.

They assert that climate change is harming lake Tanganyika's ecosystem -- fish stocks have decreased by 30 per cent over the past 80 years. The lake currently yields approximately 200,000 tonnes of fish per year. The researchers anticipate that the fish population may decline by a further 30 per cent if the present air temperature increases by 1.5c. Considering the already existing problems of malnutrition and civil conflict in the region, a significant decline in fishing yield could have serious consequences for the region's food supply.

Lake Tanganyika is large and deep, filling the chasm of a rift valley bordering the Democratic Republic of Congo, Tanzania, Zambia and Burundi. An ecosystem in itself, the lake is home to a wide variety of fish. Only a few species are consumed; yet they account for 25 to 40 per cent of the animal protein intake of the people in the region.

The researchers measured water and air temperatures, along with wind velocities, and then compared the data to equivalent records of the past eight decades. These factors helped determine how well the water circulates within the lake -- a critical factor for the distribution of nutrients that support the lake's foodchain. O'Reilly and her colleagues found that temperature of the air above the lake has increased by 0.6c, with a proportional increase in the water temperature. However, wind velocities have decreased considerably.

These changes have stabilised the water column of the lake; the increased stability has decreased water circulation, hampering the re-supply of nutrients from the deep water to the surface water where they help algae grow. The researchers analysed the levels of organic matter from well-dated lake sediment cores, and found that even algae abundance has declined by 20 per cent over the 80-year period for which data exists. The decline in algae population has proved dangerous for the survival of other species, as they are the base of the lake's foodchain.