Treating only organic waste will not save Mumbai's Powai lake

By Nidhi Jamwal, A Celestine 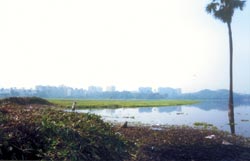 they are at it again. Mumbai authorities have grandly announced that the highly polluted Powai lake would no longer be a 'lost paradise', with a cleaning project showing positive results. But experts brush it off as a tall claim.

The cleaning project was initiated by the Brihanmumbai Municipal Corporation (bmc) in April 2002. Clean Flo, a us-based organisation, was hired to revive the 112-year-old lake using the bioremediation process. In this process, a large amount of oxygen is first pumped into the waterbody, followed by the addition of microbes that break down the pollutants. Microorganisms are suited for this task because they possess enzymes that allow them to use contaminants as food. Moreover, they can easily come in contact with the pollutants.

Oxygen is supplied to the waterbody to enhance aerobic respiration. In this process, microbes use oxygen to convert part of the carbon present in the contaminants to carbon dioxide. The rest of the carbon is used by the microbes to produce new microbial cell mass. Furthermore, during this process, oxygen gets converted to water. Thus, the major byproducts of bioremediation are carbon dioxide, water and an increased population of microorganisms.

At present oxygen is being pumped into Powai, and soon microbes would be added. According to Clean Flo, Powai would be cleaned by April 2003, and thereafter it would monitor the lake for three years. But experts and non-governmental organisations (ngos) say otherwise. They claim bioremediation will only make cosmetic changes, and not tackle the root cause -- quarrying and sewage. "The process can only get rid of organic pollutants. This way only the contractors are happy," says Debi Goenka of Mumbai-based ngo Bombay Environmental Action Group (beag). Some experts say the efficacy of bioremediation to treat heavy metals is questionable. "Bioremediation can work for metals, but so far the success stories are mostly related to organic pollutants," says Prabhakar Clement, associate professor of environmental engineering, Auburn University, Alabama, usa.
Powai's pollutants are mainly inorganic in nature. In 1997, bmc had found high levels volumes of suspended solids (330 parts per million (ppm)), dissolved solids (838 ppm), chlorides (145 ppm) and sulphates (108 ppm) in the lake. Thereafter, the corporation declared the lake almost dead. Siltation, too, has shrunk the lake from its original 135 hectares to 42 hectares. According to Mumbai-based Bombay Natural History Society, 3,000 cubic metre of silt has been accumulated till date.

Then there is the untreated sewage. "A few years ago, the state government made the area a 'residential' zone from a 'no-development' zone. This facilitated the entry of builders such as the Rahejas and Hiranandanis, who made use of the lake water and constructed buildings around it. Residents now freely dump their waste, which is not completely organic in nature," says Aruna T Dikshit, of the Save Powai Lake team. In 1996, large-scale deaths of silver carp fish were reported.

The Union ministry of environment and forests (mef) chose Powai for reclamation and protection under the National Lakes Conservation Plan (nlcp). Rs 6.4 crore was released for the cleaning project in 1992. But the project commenced only a decade later. In 2000, these delays were highlighted by a 15-member Lok Sabha committee, which accused the Union and state governments of showing no interest. Experts say that even now the government is wasting money on bioremediation. But, says R P Sharma, adviser to mef, "We carried out a similar project for Kachrali lake of Mumbai, which was quite successful. We are hoping to get similar results for Powai."

Experts disagree. "The Kachrali project was successful because it is a smaller lake and major pollutants were organic in nature," says K C Sahu, a retired professor from iit, Mumbai, who has studied Powai for many years. Sahu asserts that to clean Powai, the most important thing is to stop the dumping of pollutants. Others suggest that a group, consisting of bmc and company officials, engineers, environmentalists and residents, should be set up to monitor the lake. The idea is to have a long-term strategy, involving local people, so that the lake remains free from the ravages of quarrying and untreated sewage.