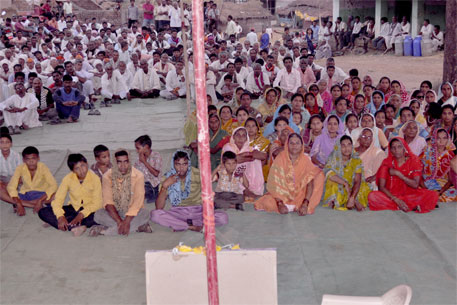 Farmers’ protests against the proposed thermal power plant of Bhandara Thermal Power Corporation in village Rohana in Mohadi tehsil of Hyderabad district are growing louder. Farmers allege that the company has acquired nearly 600 ha of land in the village for a paltry Rs 8 lakh per acre (0.4 ha) without the consent of the gram sabha. Repeated appeals to the district collector have proved futile.

For the past one year, residents of Rohana village have been protesting against the manner in which Bhandara Thermal is going about acquiring land in the village for its 2,460 MW power plant. Naresh Ishwarkar, deputy sarpanch of the village, says that no meeting or public hearing was held by the company in the area, and that the gram sabha and panchayat bodies were not taken into confidence while initiating the acquisition process. “Land acquisition is being done by 12 commission  agents of the company who are enticing the male heads of farming families through drink parties. Many men put their signatures on registry papers while in an inebriated condition,” he alleges.

Other malpractices are also involved in the acquisition. The land in Rohana comes under the irrigated area of the Bawanthadi irrigation project, but the local tehsildar changed its status to rain-fed to facilitate the acquisition, allege villagers. “This area is agriculturally rich due to the abundant water of the Sur river. More than 80 per cent farms have well or borewell irrigation, and farmers take three paddy crops a year,” says Ramdas Dixit, president of Prakalpa Badhit Shetkari Sangharsha Samiti (committee of project-affected farmers) of Rohana. “The Rs 8 lakh per acre paid to farmers far less than what the land is worth,” he says. Local BJP MLA from Sukli, Nana Patole, had raised the matter in the state Assembly recently, and a probe was promised, but no action has been initiated.

The purchases also violate a Supreme Court order which grants the female head of a farming family equal ownership rights over land, says Sanjay Kolhe of the Pani Bachao Samiti of Amravati, a farmers' group opposing allotment of irrigation water to power plants. “The land parcels were virtually stolen from the male family heads. Many families found out that their land was sold only after the registration papers were signed, and none of the sale deeds have the signatures of the female family heads.” Villagers say that many farmers who were hoodwinked in this way now want the sale deeds annulled and their land returned, since their livelihoods are in danger.

For the past one year, the Rohana gram sabha and panchayat bodies had registered repeated complaints with the district collector regarding the illegal land acquisition process, but no action has been taken, says Ishwarkar. “Initially, the collector wasted a lot of time by telling us he had absolutely no information about any power project coming up in the area,” he says angrily. “Recently, when we took yet another delegation to him on May 10, he asked us why we were opposing the power plant. He even suggested that the area will benefit from the ‘development’.”

Land acquisition to be challenged

Things came to a head on May 30 when farmers from 15 villages in the area came together for a meeting in Rohana, organised by the Pani Bachao Samiti and the Rohana gram sabha, and resolved not to sell any more land to Bhandara Corporation, which still requires another 900 ha for the plant, and also decided to challenge the acquisitions made so far.  Within two days, on June 1, the company started land-levelling work on the acquired land. Villagers stopped the work promptly, but the next day the company restarted work with the help of police.

Villagers say this last development has severely jeopardised the safety of the villagers and the possibility of democratic protest. “We are now scared that any protest on our part may be met with police violence,” says Rohana resident Hiraman Bondre.

Farmers, meanwhile, have expressed a firm resolve to oppose the power project. “We do not believe in the development jargon of the administration,” says Ishwarkar, “The power plant will destroy our land and the resultant pollution will make land in a large area around it infertile. What's more, we will not be getting any of the electricity generated by the plant.”

District collector Pradeep Kalbhor, who was recently transferred as collector Gondia with additional charge of Bhandara, could not be contacted for comments.