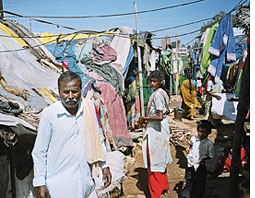 the Bangalore Corporation has decided to give land titles to 36 slums. On February 14, the corporation chairman announced the decision at a meeting with a joint action committee of ngos. The city commissioner asked revenue officers to identify the slums in the corporation area and issue land titles. Several economically backward people will get legal rights over 100 hectare of prime land in Bangalore.

"People who hold possession certificates will get permanent land titles,'' said S Subramanya, commissioner of Bruhat Bengaluru Mahanagara Palike. Many slum dwellers hold temporary possession certificates which do not give them any right to oppose demolitions or relocation measures. The ngos have been asking for permanent sale deeds, mandatory under the Karnataka Slum Areas (Improvement and Clearance) Act, 1973, for long.

Though the Karnataka Slum Clearance Board has included slums formed only before 1991 in the plan, the ngos have sought an extension to 2001 since several new slums came up during this period. "In the first phase, slums in the posh Koramangala area will get titles and the rest will get the titles in a phased manner,'' said P Lakshapathy of the ngo, apsa Bangalore, a member of the committee. Some of the slums have also been identified for various projects under the Jawaharlal Nehru National Urban Renewal Mission.

In September 2007, the state urban development department asked municipalities to survey slums for land titles which many of the civic bodies ignored. This led to protests. The survey is yet to take place in Bangalore, but in some areas such as Mandya and Hospet, authorities have completed it.