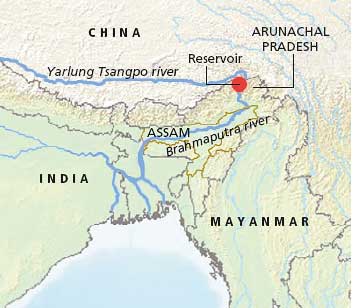 a landslide on the Indo-Tibetan border has blocked the course of the river Tsangpo (Brahmaputra) resulting in the formation of a reservoir. This may cause flood in downstream areas of Arunachal Pradesh and Assam if the barrier of mud and debris bursts under pressure from water accumulating on the other side.

The reservoir was noticed by jawans of the Indo-Tibetan Border Police in mid-April. They alerted the Arunachal Pradesh administration. The mud wall, blocking the river, is said to be 49 metres thick. A breach in it will affect Siang district in Arunachal and Dhemaji district in Assam, said Keshab Chhatradhara of People's Movement for the Subansiri and Brahmaputra, fighting construction of mega dams in the region.

Government officials said the landslide in Namcha Bawra mountain might have occurred in December 2008."On December 21, the water level in the Siang (as the river is known in Arunachal) dipped from 1.84 metre to 1.80 metre in Tuting sub-divisional area close to the border," said Onit Panyang, deputy commissioner of East Siang district. The water resources department is monitoring the level of the river and people have been alerted, he said.

While officials said the reservoir would not cause any major damage, Chhatradhara said people fear a repeat of the 2000 flash floods that had displaced 2,000 families in 13 villages. None of the families got government aid, he said. The frequency of floods due to landslide-induced dam outbursts and sudden discharge of water from glacial lakes formed by glacial melt will rise as the globe warms, said Partha Jyoti Das of Aranyak, a non-profit studying climate-induced hazards in northeast India. B P Duorah, who teaches geology in Guwahati University, explained the severe earthquake in 1950 had destabilized the steep mountains. "Formation of the reservoir is linked to loose sediments in eastern Himalaya," he said.