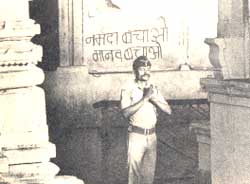 THERE is considerable speculation amongst the anti-Narmada activists as to how the recent clashes between the police and the villagers of Manibell will influence the attitude of the principal financiers of the dam, the World Bank and Japan. Medha Patkar of the Narmada Bachao Andolan (NBA) did not look happy over the response of the Japanese team which visited Manibeli after the state-sponsored shifting operations.

When she asked about possible Japanese reappraisal, Ishibashi, a team member, said diplomatically, "Your opinion will be taken care of to make it a better project." Patkar is now in Japan to mobilise public opinion against the dam with the help of Japanese NGOs. "The opi 'nion of this team is crucial for the Indian government which is waiting for the Japanese government to release funds suspended in 1989 in response to the opposition from the Friends of the Earth, Japan," says Ashish Kothari of Kalpavriksh, an NGO in New Delhi.

"There is a difference in opinion even within the Japanese government. While the Japanese finance ministry is in favour of funding this project, the external affairs ministry and some Diet members are resisting the moves," says Kothari.

The Indian government is worried about the villagers' threat to drown themselves in the rising waters of the dam. Any rash step will attract international criticism. The grapevine has it that a high-level committee may be set up to review the situation.

People are still guessing what the 8 independent review of the World Bank will say. The prodam groups are optimistic. Says Gujarat minister for water resources, Babubhai Jashbhai Patel: "The World Bank would find things satisfactory."

But to the Tadvis and Basawas of Manibeli, an isolated tribal village in Maharashtra bordering Gujarat,. "doomsday is here". Legend has it that doomsday wilt come when one of the dual deities of the Surpane shwar temple gets immersed in the Narmada waters and the other is 'moved elsewhere. When, this monsoon, the Sardar Sarovar dam obstructs the flood waters and submerges the temple, the concealed shivalinga will get immersed, while the other linga will be shifted to a new temple in Goregaon in Vadodara. district.

Yet, when the government moved in to shift the villagers on March 26, Manibeli reverberated with "Hum doobenge, par nahin joyenge (We shall drown, but not budge)."

Over the years, some families from Manibeli had moved to Parvetta, the resettlement site provided by the government. But they had left their homesteads behind. On March 26, government officials from Gujarat and Maharashtra and some pro-dam NGOs accompanied the resettled families to Manibeli with police reinforcement. The police intervention is being justified by the government on the ground that the families resettled in Parvetta and those in Manibeli wanting to shift were being prevented from doing so by the anti-dam activists, The resistance led to open confrontation between the two groups.

The Andolan is losing people, claim pro-dam groups. Of the 38 families which shifted houses during the operation in Manibeli, 18 moved out for the first time. "The majority of them now believe that the dam is inevitable," says Narainbhai Manjibhai Tadvi, who also decided to shift to Parvetta this time.

Union minister for water resources V C Shukla sent a fact-finding team. The team absolved the police of all sins. It submitted its report on April 10 and the police came back in full force the next day and stayed put till April 23.

Appalled by the way the Central team had ignored their evidence, and the behaviour at-the police, the Andolan orgarriwd a fact-finding team of its own, headed by a retired judge, Justice H Suresh of the Maharashtra High Court. Its report stated categorically: "The locals were beaten up, their belongings damaged and looted and even women beaten up by the policemen."

But there are several versions of this event. "The situation reminds me of the Japanese film, Roshomon, where all four witnesses give four different versions of the same incident," says B G Verghese, noted journalist, who visited Manibeli and certified that the operation was conducted peacefully.

"The government's stand remains unchanged," says minister Babubhai Jashbhai Patel. "This year Manibeli will experience only partial and temporary submergence. Most of the people from the threatened zone have already moved out. Only two occupied huts and the temple will go under water. The Andolan cannot stop the dam."

@Vhat happens if the people refuse to move? "If they insist on such a suicidal strategy, we cannot look on," says P A.Raj, vice-chairman, Sardar Sarovar Narmada Nigarn Limited. "We will have to treat that as a law arid, order situation," says another official.

The villagers remaining in Manibeli have vowed to opt for "forced submergence". Even last year. a notice was issued asking villagers to moveas there was a forecast of heavy showers and consequent floods. But they refused.

There is considerable pressure on Manibeli. "They want to destroy even the base of our survival, our forest," says Sitaben. "Surveyors from the forest department tried to clearfell the village forest when the police was here. We shooed them off."

Families have split on the issue of resettlement, and tension is growing. Some of those who stayed on in Manibeli have taken lands in Parvetta offered by the government.. "If they don't want to come, why don't they give up their allotment?" asks Bharatbhai Prabhubhai Tadvi of Parvetta. "Their vacant plots close to our fields attract cattle which eat our cfops." What happens now, only time will tell.