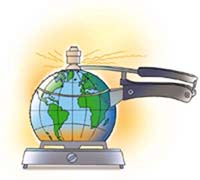 "The high confidence levels of ipcc in this report can be attributed to continuous refinement of climate prediction models and availability of more datasets," says Rashik Ravindra of the National Centre for Antarctic and Ocean Research, Goa.

While the third report relied upon nine climate models, the fourth used 23, considerably reducing the margin of errors."We have eliminated possibilities of warming due to natural factors like sun spots almost completely, through the use of these improved models and, after that, have come to the conclusion that most of the warming is human made," says ipcc chairperson R K Pachauri.
"We are prepared only for 2c rise in temperature. But some projections predict a rise in global temperatures of 3-6c by 2100," Achim Steiner, executive director of the un Environment Programme told bbc. And that is not all. Rainfall is projected to increase sharply in the higher latitudes and decrease in lower latitudes, frequency of drought will increase, and so will heat waves and tropical cyclones (see Factsheet Blow hot, blow cold).

What explains such change? The impact of the build up of greenhouse gases like carbon dioxide is now largely undisputed. The report elaborates on this. The atmospheric concentration of carbon dioxide in 2005 was 379 parts per million (ppm), far exceeding the average in the pre-industrial era of 280 ppm. 379 ppm is also the highest concentration of carbon dioxide in the past 650,000 years, as determined from analyses of ice cores.
Several climate scientists disagree with the report's content. They say ipcc has underestimated sea level rise. Sea levels rose by 3.3 mm each year between 1993 and 2006--much higher than the 2 mm forecast by the ipcc's Third Assessment Report, says an article in the February 2, 2007 issue of the journal Science.

An article in the journal's January 19 issue noted that sea levels in 2100 would be 0.5-1.4 metre above 1990 levels. This is much greater than the 0.09-0.88 metre forecast in the Third Assessment Report. What the fourth report projects is even lower a rise of 0.18-0.59 metre. ipcc defends this, saying the difference between the highest and the lowest projected sea level rise has come down, bringing more certainty to projections.

The fourth report says warming will not be severe enough to cause much melting in Antarctica. But the authors of the January 19 paper in Science disagree. They say rapid melting of glaciers, ice caps and ice sheets of Greenland and Antarctica is responsible for rapid rise in sea levels.

They contend some of the surface melt is flowing down the base of the Greenland ice sheet, potentially lubricating it, and so allowing glaciers to flow more rapidly into the ocean. "Models of the potential contribution of the Greenland and Antarctic ice sheets need to be improved," stresses John Church of the World Climate Research Programme in Geneva.

"Global warming will lead to warming of ice-sheets, but also to more moisture due to increased evaporation from oceans and land. This moisture will then precipitate as snow in polar regions, leading to increased extent of ice sheet in certain regions," he added. He advocates continuous monitoring of the Antarctic region to fully understand the contribution of ice sheets to the sea level rise. Other scientists say difference of opinion is not surprising given the momentous nature of the issue at hand.

"The main challenge will be for societies to become less vulnerable to climate change and build up resilience. We have to look at ways of coping and adapting because--in the short term at least--we will not be able to change it," says Benny Peiser, climate scientist at John Mores University, uk. Steiner, among others, hope the report will be a wake up call for governments to think about emissions cut beyond 2012, when first commitments under the Kyoto Protocol end.

"I hope this report will shock people and governments into taking more serious action. We are expecting that after the synthesis report, which will be released prior to the 13th conference of parties to the un Framework Convention on Climate Change in December 2007, we will be able to set the framework for negotiations of emissions cuts beyond 2012," Pachauri said in a press conference in Delhi. The uk prime minister Tony Blair has already outlined plans for a post-Kyoto accord. The report might help him make his case at the g8 summit in June.

A few sections of industry have also expressed concern at climate change, albeit grudgingly. Others see climate change primarily as an opportunity to invest in technology. "Technology provides solutions to offset climate change. Technological solutions must also be easily transferable to India and China--countries that will be the future drivers of economic growth, " Jacques Aigrain, ceo of Swiss Re, noted at the World Economic Forum at Davos, recently. He added that politicians must take responsibility to for pre-emptive measures, although in the end "market solutions will prevail". uk's environment minister David Miliband felt that industry needs clear signals from government. "There should be some assurance that there will be a carbon market in place once the current arrangements run out in 2012," he said.

"We have to invest very seriously in technology and encourage China and India not to make the same mistakes as the us . The world still has time, though not much time--a few decades--to progress on climate change," said Steve Chu, director of the Lawrence Berkeley National Laboratory.


A study by Anil K Gupta of the geology and geophysics department of the Indian Institute of Science, Kharagpur, West Bengal, shows that global warming is affecting monsoon intensity. But monsoon isn't gaining strength uniformly. Recent trends show that increased rain is falling on fewer days, as number of rainy days is declining (see 'Climate Change, A market failure', Down To Earth, December 15, 2006).

But is the official science establishment serious.

The 'strong speech' at the recent Indian Science Congress by science and technology minister Kapil Sibal, endorsing protection of Planet Earth from global warming, has not been matched with action. Climate change is under the charge of one joint secretary in the Union ministry of environment and forests, who also attends to other duties.

"At ipcc's Paris meeting, India was represented by a senior official in the country's embassy in Paris, while China had 10 experts from different fields related to climate change," Pachauri pointed out. "India will face the prospect of refugees from Bangladeshi if that country goes under water due to sea level rise," he noted (see 'Vanishing islands', Down To Earth , January 15, 2007).

"Climate Change should be an element of the development plan of the country. There is research by individual scientists and institutes, but a concerted long-term research is not there," says A P Mitra, scientist of eminence at the National Physical Laboratory.

Warns Pachauri "It is time India forms a road map to deal with it and upgrade energy efficiency. An enlightened electorate needs to bring these to the focus of the government and we need to restructure the way in which the government functions."

But, as Steiner reminds, the onus for cutting emissions ought to be on the West -- the us and Europe -- the greatest contributor to global warming.