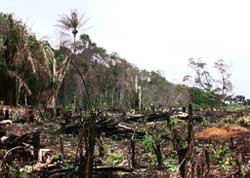 Environmentalists and the Brazilian government are lobbying hard for a new draft law on the management of public forests. The draft would allow concession of public areas to private enterprises, ngos and local communities for sustainable production for up to 40 years.

The Chamber of Deputies has already approved the draft, put together by Brazilian environment minister Marina Silva in February, 2005. In a joint manifesto, industry associations, environmentalists, indigenous people and social movements said forest-based industries need this draft law so that they can compete on an equal footing with illegal or informal operators.

But its opponents say similar legislation in Africa and Asia could not prevent the destruction of forests, or improve the life of local people.