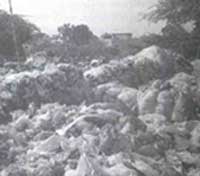 THE us-based ngo Greenpeace has launched a campaign against international trade on toxic material, and is now trying to step up the momentum of protest in India against toxic waste import, its production and disposal.

Greenpeace held a series of workshops in the country in March, which were the launch-pad for a concerted campaign in India against hazardous wastes.

At the "skill sharing" workshops held in Delhi, Madras, Calcutta, Hyderabad and Vadodara, organised in coordination with local ngos, the visiting Greenpeace team pointed out that toxic waste dumping in South Asian countries like India by companies in the West has shot up significantly. This follows the imposition of stricter import laws in other parts of Asia and the rest of the world.

According to Greenpeace figures, imports of plastic waste to India increased by 97.3 per cent from 3,974.7 metric tonnes (mt) in 1992 to 7,841.8 mt in 1993. There was a 37 per cent increase in import of plastic waste by Bangladesh in the same period and a 125 per cent increase in Pakistan. Australia, Canada, the us and the uk are the major exporters of wastes of plastic, copper, lead, ash and residue and tin plate. At the same time, activists claim that, following mass campaigns against waste imports in South East Asia, Indonesia, Malaysia and Philippines witnessed drastic reductions in waste imports.

At the Calcutta workshop attended by voluntary organisations like the Drug Action Forum and representatives of industrial units and trade unions, the participants decided to formulate action plans to deal with the problem of industrial and medical waste disposal, the import of toxic wastes and "dirty" technologies, toxins used in agriculture, and pollution from fertiliser factories. Says a member of the ngo, the Public Interest Research Group, which organised the workshop in Delhi, "Greenpeace is filling the gap in knowledge about toxics. At the same time, it has provided a forum for Indian organisations to exchange information on tools like law and the media to fight hazardous wastes and decide on a concerted course of action."

For instance, to generate more information on toxic imports, Leonard points out that wastes shipped to India need to be monitored wherever they are unloaded, in order to determine their ultimate destination. The government must also be pressurised to formulate and discuss a plan for implementation by January 1998 of the Basel Convention (a March 25, 1994 consensual decision taken to regulate transboundary toxic waste transfers).

Toxicologist A T Dudani agrees with Leonard that Indian ngos could have a tough time trying to whip up mass support because, unlike in the West where women -- housewives and mothers -- are the strongest campaigners, "in India, most people think scientists and other experts alone are equipped to lobby on the issue". India will have to evolve its own method of campaigning against toxic wastes, he says.

A lead group will be identified by July to coordinate the Indian campaign. The group will also network with the newly-formed Trade Union Partnership for Environment Protection (tupep), with members from all major trade union groups. Says H Mahadevan, a tupep representative, "We will make environment safety issues like waste handling and dumping our new bargaining agenda."