Half-built houses, no labourers. Winter threatens to be harsh 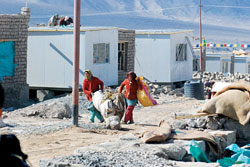 RAVAGED by flash floods in August, Leh is in dire need of homes for the victims. But rehabilitation work is far from over because of shortage of labour. Victims of floods that followed the biggest cloudburst ever in Ladakh, are living in tents or unfinished houses.

Padma Chodol’s house has prefabricated rooms made of galvanised iron, thermocol and plastic, and a kitchen of mud bricks. These are unplastered. The area for toilet, bathroom and front room has been marked but nothing more than the foundation exists.

“We could manage to construct only this much. With winter’s arrival and no labourer available, we cannot construct more before April next year,” she said while ferrying her belongings from the tent to the new house at Solar Colony, the largest rehabilitation colony set up after the floods. Using community toilets will be a big problem with temperature going below -20°C at night.

The only house to be built completely in the Solar Colony is that of 35-year-old Tenzin Dolma. “I spent Rs 5.7 lakh to construct the house. Government gave me Rs 2 lakh. I borrowed the rest from relatives and got it completed fearing the dreadful winter ahead,” she said. Tenzin lost her 16-year-old daughter in the floods.

“Problem began after the flash floods that killed a number of labourers from Bihar. About 2,500 labourers were required to finish construction before winters. Non-profits like Rural Development and You did try, but they could manage only 10-15 labourers,” said Zubin Zaman, humanitarian response manager with Oxfam India, a non-profit that distributed relief material after the floods.

“Many labourers ran away after the floods. We offered them 10 days’ food and lodging, but it was difficult to convince them to stay,” said T Angchok, deputy commissioner of the Leh Autonomous Hill Development Council. “Every year, about 5,000 labourers come to Leh from Jharkhand and Bihar for the six summer months. But this year, more than a thousand fled in August itself,” said Tadbar Joldan, assistant labour commissioner of Leh.

In Truck Terminal, another refugee camp, 24 families of Spituk Pang village were still living in tents till mid- November. “They are making bamboo houses, but it’s taking time,” said Phuntsek Dolma, a refugee in Spituk Pang. Prefabricated houses sponsored by the National Bamboo Mission are being constructed in Palam village for the refugees of Spituk Pang.