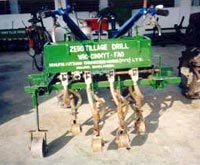 now farmers of the developing nations need not make backbreaking efforts to prepare their land for wheat cultivation. Scientists from Bangladesh-based Wheat Research Centre (wrc) have developed a tool that helps cultivate the crop without tilling the land several times. The device, zero tiller, is already popular among farmers across Bangladesh. "Researchers from India, Pakistan and Nepal are also showing interest in its performance," reveals Harun Ur Rashid, director of wrc.

Normally, farmers finely till the soil to get a good harvest. They plough the land at least four to five times before sowing seeds. This takes considerable labour, and costs more than Rs 758 per 0.4 hectare of land. The zero tiller helps save this amount. It is attached at the back of a power-tiller machine (a small two-wheeler tractor used in Bangladesh). As the tractor moves over the land, one device of the zero tiller make a one-inch deep furrow, and another of its component simultaneously drops the seeds and fertilisers into the hole.

"It is not an indigenous technology. In developed countries, farmers use a sophisticated version of this method. We only modified their technique so that it could be economically viable for the farmers from the developing world," reveals Rashid. The zero tiller costs Rs 9,087; the price of a power-tiller machine is Rs 30,294. This expense can be recovered in the long-run -- the ideal period to sow wheat seeds is November-December every year; Bangladeshi farmers are often unable to take advantage of the perfect atmospheric conditions prevailing during this period due to the late harvesting of rice. Ploughing the land four to five times further delays the sowing of wheat by another 10-15 days. Sowing the seeds even a day late in the peak season means of a loss of 18 kilogrammes of production per 0.4 hectare.

The zero tiller allows farmers to plant wheat immediately after the harvesting of rice. "If farmers plough the land, they get 25 mounds (37.5 kilogrammes) of wheat per 0.4 hectare. But if they use the zero tiller, about 36 mounds per 0.4 hectare can be cultivated," claims Monzur Rahman, chief scientific officer of the Rajshahi division of wrc, who played a key role in the development of the tiller. The technology is indeed promising. But it even has a limitation -- the soil needs to have high moisture level for the tiller to function properly.