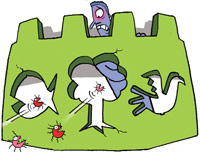 WORLD leaders trying to mitigate the effects of depleting biodiversity of various ecosystems have a reason to worry. Loss of biodiversity may make organisms, including humans, more vulnerable to infectious diseases and influence emergence of new illnesses. That is the conclusion of a paper which stated animals, plants and microbes act as a buffer between people and disease-causing pathogens.

Since 1970, diversity of birds, mammals, amphibians, reptiles and fish has declined by almost 30 per cent, a report by WWF stated. Researchers from the Bard College in New York, who reviewed several studies, attributed the decline to increased human population and plundering of ecosystems to meet growing demands of food, timber and fuel.

The researchers studied spread of several diseases, including hantavirus pulmonary syndrome, a fatal disease spread by rodents. Hantavirus is a group of viruses that feed on rodents. The disease is transmitted to humans through rodent bites. If loss in biodiversity reduces species which prey on rodents, then density of hosts or carrier rodents will increase, and so will transmission of the disease.

Transmission can also occur if the number of hosts remains constant when biodiversity declines. To illustrate, the paper published in the December 2010 issue of Nature mentioned a 2009 study on schistosomiasis, a parasitic affliction among people in tropical climates.

Schistosomiasis is caused by Schistosoma mansoni, a parasite which infects snails and humans. In an experimental setup, equal numbers of host snails were put in two tanks. In one tank, species of non-host snails were added to increase diversity. Both the tanks were then exposed to the parasite. The study, published in Proceedings of Royal Society of London, found that the snails in the singlespecies tanks were 30 per cent more likely to get infected than those in the tank with diverse snails as parasite often ended in dead-end hosts.

But what happens to an ecosystem where host species are lost? In such systems, the researchers said, chances of disease transmission reduce because pathogen declines. However, such instances are rare.

The researchers said sometimes new strains of viruses evolve by developing resistance to drugs. This calls for rational use of antibiotics. T Jacob John, former head of the department of virology in Christian Medical College, Vellore in Tamil Nadu, explained that prolonged use of antibiotics disturbs the microbes inside the human body by eliminating the sensitive ones. As a result, resistant microbes are left which can become dominant.

The researchers noted that from 1940 to 2004 more than 300 new human diseases emerged worldwide, including Japanese encephalitis, dengue, HIV/AIDS and bird flu in India, and many old diseases such as malaria resurged.

But John is not fully convinced with the Nature paper’s claims, and said, “There is not enough evidence to suggest that reappearance of diseases is linked to biodiversity loss.” He cited emergence of chikungunya in 1963- 1964 in Kolkata. The insect-borne virus, which causes high fever and joint pains in humans, was not reported after that, but it reemerged in 2007-2008 in India.

There is no evidence that links the reappearance to loss of biodiversity. Transmission of diseases can be controlled by managing biodiversity. Addition of a species, like a competitor, can reduce impacts of established pathogens. A 2009 study published in Multidis-ciplinary Journal of Microbial Ecology explained this.

Chytridio mycosis, an infection caused by the fungus Batrachochytrium dendrobatidis, is the biggest cause of mortality in frogs worldwide. In an experimental set up when Janthino bacterium lividum, a naturally occurring antifungal bacterium was added to the skins of the frogs, it eliminated mortality.

How to fix the loss?

Policy-makers should understand the urgency of preserving ecosystems, according to the researchers of the Nature paper.