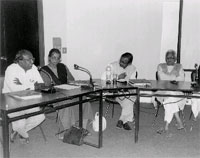 governments today manage a natural resource by first nationalising it and then creating a bureaucracy to handle it. But the method that was used in the past is precisely what all modern environmental economists are advocating, which is letting the people manage their natural resources and giving them the right fiscal incentive, says Anil Agarwal, director of the Centre for Science and Environment (cse), New Delhi. He was speaking at the panel discussion on the Role of the State in the Management of Environment at the conference on Ecological History and Traditions organised by cse. The three-day conference beginning March 27 at the India International Centre, New Delhi, was attended by scientists, historians, environmentalists and research scholars from all over the country.

"If we look at the past, we can see that a very decentralised system was being used.And it is for everybody to see that in the last 50 years, the functioning of the government as far as managing the resources goes, has been inefficient," said Agarwal. "In the last two decades, the ecological crisis has grown and it is the people who have taken action. For example, the works of P R Mishra in Sukma lake in Patamlu district of Bihar has led to extraordinary transformation of the village ecosystem. Anything which could be learnt from our past is to be respected," he added.

Noted historian and Gandhian Dharampal, from Sevagram in Wardha, Maharashtra, speaking on the occasion said that the British had set up a system which was beneficial only to the elite and the same had been followed after independence." Unless power comes to the majority of India's people we cannot go forward," he stressed.

Echoing the mood of the meeting, S P Gupta, chairperson of the Indian Archaeological Society, New Delhi, said that in the past people devised their own methods to preserve the environment in their states. According to evidence found by the Archaeological Survey of India, during third century bc, each city was independent and the state had very little to do with economic and ecological changes occurring within society.

It was pointed out by the speakers that the ecological crisis has occurred due to the changing perception of the interaction between nature and human beings. One of the papers presented at the panel discussion illustrated how the canal system introduced by the British in Orissa and Bihar became detrimental to the local environment.

Another paper presented by D D Dangwal of National Institute of Science, Technology and Development Studies, New Delhi, criticised the British forest policy which ignored aspects of biodiversity and the rights of the local community. Such materialistic, exploitative policies led to environmental degradation. On the contrary, Indian civilisation had considered animals and nature as "partners in man's progress," as N S Ramaswamy, director of Centre for Action, Research and Technology for Man, Animal and Nature, Bangalore, pointed out in his paper. Other speakers spoke on topics as varied as El Nino (storms occurring in the equatorial Pacific Ocean) causing droughts in India, eco-friendly metallurgic practices of ancient India and tribal forestry practices.