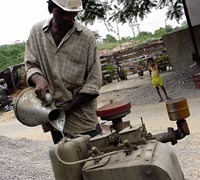 small-scale diesel generator set manufacturers have once again managed to evade adherence to the Environment (Protection) Second Amendment Rules, 2002. The regulations specify emission norms for various categories of off-road diesel gensets. The Union ministry of environment and forests (moef) recently granted a one-year extension to diesel gensets below 19-kilo watt (kw) capacity for complying with standards that had to be met by July 1, 2004. Manufacturers of these gensets had also succeeded in evading last year's deadline.

However, in 2003, manufacturers of gensets below 19 kw approached the moef under the banner of the Indian Diesel Engine Manufacturers Association (idema) for a one-year extension on meeting the norms. " idema approached the ministry on the pretext that small-scale manufacturers cannot meet the specified standards. After much deliberation, they were given a year's extension as per which they had to straightaway meet the July 1, 2004, standards. This they agreed to then," reveals a Central Pollution Control Board official. With the 2004 deadline approaching, idema recently approached the ministry for another extension. "We did not get an extension last year in the real sense, as we were given one year's time to meet the 2004 standards directly," argues Ramesh Pasrija, chairperson of idema's technical commission.

Meanwhile, the moef's move has angered large-scale genset manufacturers, like Pune-based Kirloskar Oil Engines Limited, who have invested a lot on compliance. "It is very unfortunate, as this is the second time small-scale manufacturers have got a year's extension," rues Vijay Varma, vice-president of the company. moef official Nalini Bhatt, who is handling the matter, was not available for comment.