To be monitored in Indian cities, says pollution board 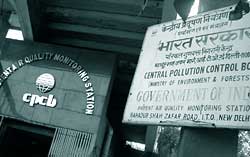 the Central Pollution Control Board (cpcb), India's apex pollution monitoring body, has decided to initiate monitoring particles less than 2.5 micron in size (pm2.5) in the ambient air of ten critically polluted cities from 2005. It has also proposed to bring ten more cities under this scanner every year after 2005. The cities will be prioritised on the basis of their violation of air quality standards for other pollutants. pm 2.5 has been associated with premature mortality and other serious health effects but its threat has not received due acknowledgement in the country.

Many studies have found very high levels of pm 2.5 in Indian metros. In many cities, the 24-hourly levels of these particles exceed the United States Environmental Protection Agency's (usepa) standard of 65 microgramme per cubic metre (g/m 3) and the Indian provisional standard of 75 g/m 3, proposed by a cpcb expert committee in February 2004. Daily levels of pm 2.5 in Indian metros during winter could be as high as 350 g/m 3. The average pm 2.5 levels were 132 g/m 3 in Delhi, 56 g/m 3 in Mumbai and 108 g/m 3 in Kolkata, according to a recently published World Bank data, based on a study conducted by the Georgia Institute of Technology (git), Atlanta, in August 2004. Monitoring by the West Bengal Pollution Control Board in Kolkata also revealed that the daily levels of these particles during winter months in 2003 could be as high as 378.8 g/m 3. The git study showed that the contribution of diesel combustion in pm2.5 levels could be up to 61 per cent.

However, experts point out that the monitoring of pm2.5 could face several snags. Methods used by different institutions have to be standardised. A committee under the aegis of the cpcb, which is evaluating the policy and guidelines to prevent, monitor and control pm 2.5, has proposed formulating a uniform standard monitoring methodology, equivalent to the usepa federal reference method. According to a cpcb official: "The absence of any instrument-certifying agency in the country and any approved Indian-make instrument are the major reasons for delay in pursuing pm 2.5 monitoring.