Facts of the Thar

As rightly mentioned in the article “Blowing in the wind” (August 1-15, 2011), dust storms are governed by two factors: erodibility (susceptibility of soil to wind erosion) and erosivity (ability of wind to cause erosion). 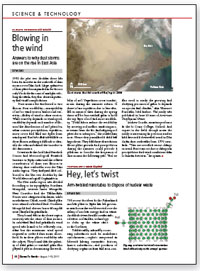 In the Thar desert, once in every four to five years severe drought occurs followed by a good monsoon year. Whenever a severe drought has occurred, the intensity and frequency of dust storms have increased. On the contrary, a good monsoon year resulted in less number of dust storms. For example, in 2009 five severe dust storms were recorded in Jaisalmer, whereas in 2010 only one. This was due to the great difference in total annual rainfall in the Jaisalmer region: 73.6 mm in 2009; 370 mm in 2010. Even if one assumes the erosivity as relatively constant over a year, erodibility is varying according to the annual variation of rainfall. During a good monsoon year, grass cover over desert increases, protecting the soil from erosion. Wet soil also reduces erodibility.

Another point is, recent land use change and heavy grazing in the Thar has increased the severity of dust storms. According to a 2008 report of the Central Arid Zone Research Institute in Jodhpur, Rajasthan, the area under rainfed cultivation in Jaisalmer has increased 332 per cent and net irrigated area has risen from 110 hectares (ha) to 146,246 ha between 1980 and 2006. This expansion has been at the expense of grasslands. Grazing pressure on pastures has also increased with livestock rearing remarkably increasing from 2003 to 2007 in western Rajasthan. All these points implicate that dust storms in the Thar desert follow a cyclic change mainly driven by land surface changes.

This refers to the article “Mining for people” (August 1-15, 2011). The new mining bill should clearly define how the District Mineral Foundation, which will receive the funds accruing from the profit-sharing provision of the bill, will function. The body’s statutory liability should be specified so that the funds are used properly. The best way will be to dovetail the funds with other ongoing government programmes. The bill should lay down standards for scientific mining with ecological consideration. The mining official should be accountable to observe the norms.

In this way we would curb rampant corruption and protect the interest of the society and promote sustainable development.

The cover story “Ethics on trial” (June 16-30, 2011) has brought into focus the biggest scam going on in the name of clinical trials. The drug companies act through contract research organisations (CROs). But there are many unrecognised CROs operating in India. Stringent action should be taken against them. Only those CROs should be recognised that have required and efficient equipment, and assistance from hospitals and expert doctors.

The biggest setback is when a drug adversely impacts a volunteer, they are left uncared for. But they do not protest. There should be provision for assistance by the government to take immediate remedial action in such cases.

It is unfortunate to know that several pharma companies in Hyderabad are luring gullible and illiterate people from villages with hefty amounts to undergo tests for new drugs and vaccines without their consent (‘Lured, used and discarded’, August 1-15, 2011). Various health-related complaints received from volunteers bear testimony to the fact.

The Drug Controller General of India should ensure that pharma companies strictly follow the mandatory provisions and guidelines, and make the entire process transparent. Volunteers should be duly informed about drugs and its effects before being tested. In case of any adverse reactions, volunteers should be treated immediately with suitable compensation for the suffering.

Is samosa a junk food?

It is great that the government is planning to ban junk food (‘Ban likely on junk food in schools’, August 1-15, 2011). Children prefer them despite high quantities of salt and other preservatives because of the image created by advertisements.

We should revive our traditional snacks, bulldozed by a wave of the “branded” snacks.

But what is the definition of junk food in the Indian context? Do samosas and vada paavs also fall under the category of junk food? 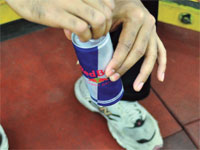 This refers to “Cap energy drinks” (July 16-31, 2011). Caffeine has become a part of everyone’s diet, thanks to large consumption of tea and coffee. In the interest of national health, the Food Standards and Safety Authority of India should immediately set standards.

We have found that some artful gremlins have managed to slip in some of our cover stories. In “Who is watching GM crops” (May 16-31, 2011) we had reported that the Genetic Engineering Approvals Committee had approved 144 applications for field trials in one sitting. This should have read in one year (2006-07). In “Maize Mania” (August 1-15, 2011) a chart, “Who eats the maize”, was inadvertently attributed to the US Grains Council. The correct source is the Directorate of Maize Research. We regret the errors.