This refers to the article, “The secret garden” (November 1- 15, 2011). The Sundarbans is one of the largest mangrove forests and home to the famous Royal Bengal Tiger and numerous fauna, including spotted deer. Situated in the Ganga-Brahmaputra delta of the Bay of Bengal, the forests cover an area of 10,000 sq km, of which about 4,000 sq km lies in India. The rest is in Bangladesh. In 1987 it became inscribed as a UNESCO world heritage site. But today the ecology of the Sundarbans is at risk due to illegal felling of trees and rampant poaching.

The first census in 1951 showed about 1.45 million people lived on the Indian side of the Sundarbans. At present, the population stands at 4.5 million. Most people are poor and depend on forest resources, like timber, for livelihood. Timber traders bribe authorities so that they can fell as many trees as they desire. The sundari tree, from which the Sundarbans got its name, has decreased considerably over the years due to overextraction and increased salinity in the soil (the tree needs sweet water for regeneration). Due to salinity in the soil, agriculture is difficult in the area. So people turn to cultivation of tiger prawns. They indiscriminately catch tiger prawn seeds, killing other fish species in the process. The much-valued skin of tiger and deer has resulted in excessive poaching in the area. Some traditional Chinese medicines also use tiger bones.

Despite various agreements, the government has not been able to save the wildlife and the ecology of the region. A recent study says the Sundarbans act as a carbon sink, absorbing 40 million tonnes of CO2 from the atmosphere.

Small wonder then that the Sundarbans, despite its beauty and biodiversity, lost the race to become one of the New7Wonders of Nature. 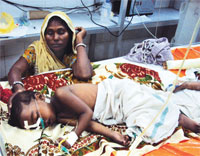 In a state headed by a ruler more interested in erecting statues, it is easy to understand why its health infrastructure has gone for a toss (‘Fever stalks UP’, November 1-15, 2011). People have been inflicted with new diseases both in the urban and the rural sectors. It is for this reason there is rampant spread of viral encephalitis in parts of Uttar Pradesh with Gorakhpur and its surrounding areas badly affected.

Poor hygiene and sanitation have added to the woes of the poor in the eastern side of the state where most cases of viral encephalitis have been reported. With no major action taken so far, the purpose of a welfare state stands diluted. Thanks to short-sighted and lopsided medicare policy, matters are getting worse for the rural and urban poor.

It is shocking to see that public institutions in the country are exploiting biological resources to help private companies (‘Act of omission’, November 1-15, 2011). While countries like Peru are trying hard to preserve their biodiversity, India is selling its resources to corporates with the help of public research.

During my numerous visits to villages across India, I noticed that farmers in small areas look forward to public research scientists than shopkeepers from whom they buy raw material. The changing role of public institutes needs to be questioned. They should be brought under scrutiny of law; an audit of public research institutes should be done by the Comptroller and Auditor General of India.

This refers to the write-up “Monsoon dates to be revised” (November 1-15, 2011). In 1972 a question was raised in Parliament: whether the present date of monsoon onset over Delhi (June 19) is correct? Following this, a group of researchers, including myself, prepared a report on the revision of dates of the onset of southwest monsoon over the western coast and Delhi.

We submitted our report to the concerned authorities but were not allowed to publish it in the journal of India Meteorological Department (IMD). The revised date for Delhi was July 2; for Kerala May 31/June 1; and for Mumbai June 10. 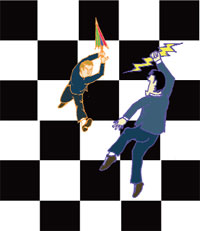 The editorial, ‘How to rewrite the Durban script’ (November 1-15, 2011) has rightly pointed out that nothing positive would emerge with regard to reducing carbon emissions. Political cartelisation of the West to protect their economic interests in the name of global economy in this unipolar world is hard to crack. A case in point: while the US has arm-twisted the Swiss Bank for revealing the tax evaders’ dollars deposited there, India has been forced to take cover under a silly protocol to not reveal the names or tighten the screws on those who have strayed.

The West, Russia and China have devastated the earth’s crust and the sea bottom with their unbridled thermo-nuclear tests. Meanwhile, they have imposed restrictions on countries like India.

Interestingly, Felix Padel, Charles Darwin’s great-great-grandson, has taken up the cudgels to fight for India’s ecosystem. He has spoken against the corporate land mafias damaging the ecosystem by flushing out tribal communities. He has even criticised the West for contortion of Darwin and Spencer’s survival of the fittest theory to suit capitalism. Propagation of life is under real threat because of capitalists’ greed leading to climate change.

Whether climate is changing or not, the current focus should be on global economy. At a time when the world is struggling to deal with recession, it would be absurd to propose steps to cut emissions.

With global population touching seven billion and unemployment remaining high, it is better the issue of climate change is put on the backburner.

Climate change treaties have become oxymorons. How can a critical issue like climate change be discussed by flying to a conference and staying in an air-conditioned hotel?

It is time we retrospected the predecessors of Durban and analysed the causes of failure. As rightly pointed out in the write-up, the Durban meet is going to be another session of shadow-boxing, with no fruitful outcomes. Historical emitters do not want to take the responsibility of their past deeds. They just want to play the blame game. But the world should now realise that climate change is unequivocal. Even if we stop emissions, climate will lay its catastrophic and uneven impact on the vulnerable. The least contributors to the problem are the most hit. 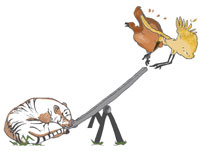 Asad R Rahmani’s write-up “The imbalance act” in the wildlife special issue (October 1-15, 2011) highlights the problems conservationists face. Recent media campaign highlighting the plight of the big cat has obscured the threats to bird species across the country. Throughout the issue, this point was highlighted using various instances. While not disregarding the need for conservation struggles for big cats, the articles in the issue brought to the fore the need to put in the same effort to protect other species, which are at risk but neglected. A flurry of illustrations instead of the regular photographs made it an enjoyable read.

The problem of antibiotic resistance in India is a matter of great concern (‘Fatal resistance’, October 16-31, 2011). Newer and expensive drugs are being given to innocent patients just to make profits. Antibiotics, which are supposed to be given in life-threatening situations, are being used indiscriminately.

My own family has suffered the wrath of unnecessary expensive medical procedures. My nephew’s child, born of what I feel was an unnecessary ceasarian operation, developed some minor problem on the second day in hospital. He was diagnosed with fungal infection of the blood. The child remained in the hospital for a month and treatment cost Rs 6 lakh. The story of many newer vaccines is not much different. The result is newer diseases and newer drugs.

The cover story has elaborately dealt with the irrational use of antibiotics that makes drugs ineffective. But that need not be confused with certain new diseases for which we have not yet found right medicines. Misuse of antibiotics occurs due to self-medication, pressure on doctors by pateints to get quick results, wrong diagnosis and malpractice.

The ultimate solution will be to get more hospitals, more doctors and paramedical staff to cover the country. More importantly, hygienic conditions should be improved and treatment for the poor should be made free. Restricting sale of antibiotics may be unjust but not stopping indiscreet sale.

With reference to the problem of antibiotic resistance in the country, Ramanan Laxminarayana, director of the Center for Disease Dynamics, Economics and Policy, recently said over-the-counter sale of antibiotics cannot be banned.

The government needs to take stern action against sale of antibiotics. It should make the public aware about antibiotic resistance and antibiotics availability.

Despite the economic growth India has a lot to achieve in terms of medical care. The write-up has brilliantly reflected this. Moreover, the cover photo is striking. I hope Down To Earth continues to be as radical with its future cover stories and photographs.