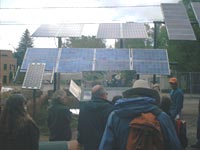 Solar energy users in California emerged victorious when the state Public Utilities Commission (puc) exempted them from paying an exit fee for leaving the state grid and generating their own power. The puc agreed to exempt many types of small renewable methods of self-generation of power by customers of utility companies.

Consumers who installed their own power generation -- based on solar, wind and fuel systems -- before January 17, 2001, are not required to pay any surcharges. But owners of renewable energy systems larger than 1 mega watt will have to pay a special surcharge, which is expected to be nominal. The victory came after weeks of campaigning by consumers, renewable energy industry, environmentalists and lawmakers.

The puc had earlier announced a charge for electricity consumers planning to withdraw from the grid network to generate their own energy. The fee proposal was the result of California's energy crisis of 2000-2001, which cost the state billions of dollars. The plan would have added us $2.50 to us $13.50 to a household's monthly utility bill.