A meteor shower will light up the sky like a Christmas tree. But electronic satellites may not enjoy it 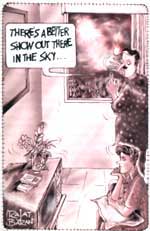 COME November 17 and sky watchers will get cricks in their necks. But it will be worth it.

The Earth will wade through a spectacular rain of meteors left behind by a passing comet. The last time the planet passed through the cosmic debris in 1966, hundreds of thousands of lighted objects lit up the sky. Though expectations are high for a similar event this time around, meteor storms are an unpredictable lot and can disappoint as much as they enthral.

Dozens of meteors keep hitting the Earth's surface and get burnt up all the time. Occasionally, there are showers and storms of meteors associated with passing comets. This storm of meteors is known as Leonid meteors as it comes from the direction of the constellation Leo. Leonid meteors originate as dust or small chunks that break loose from the comet 55P/Temple-Tuttle when it approaches the Sun on its 33-year orbit. Consequently, the stretch of dust and particles intersects the Earth's orbit once every 33 years. The comet was discovered in 1865 by Ernst Temple and Horace Tuttle, hence the name.

The meteor shower poses no threat to life on the Earth. Most of the cometary particles are smaller than grains of sand and will burn up high in the atmosphere. Sometimes, larger portions enter the atmosphere, producing fireballs that leave lighted trails that can persist up to several minutes. These fireballs explode occasionally, resulting in dazzling flashes of light.

Historical records of the Leonid meteors go back to about 1,000 years. But this time, there is a unique situation. The last time the Earth ran into the meteor storm, space programmes were in their infancy.

Now, there are roughly 600 satellites orbiting the planet. About 300 of these are from the US, of which about half are military. Scientists are unsure about the impact the meteor storm will have on these satellites. They will be hit by ultra-high-speed meteor dust. There is little possibility of major damage to the satellites, but the risks cannot be ruled out.

The fear of damage to satellites has prompted several experts to work out ways of minimising hazards. Operators of important and expensive satellites are taking no chances. Whenever possible, satellites will be turned out of the way of the meteor storm for a few hours and placed in partial 'electronic hibernation'.

However, important satellite functions such as television transmission will continue. Ground controllers of certain satellites will reduce the number of commands from ground stations to prevent garbled or distorted commands which can result from contact with dust particles power supply will be temporarily reduced for some satellite systems to alleviate chances of electrical problems that may arise due to meteoric dust.

Since the beginning of space programmes, damage to spacecraft from meteorites has been rare, except Olympus, a European communications satellite, which was knocked out operation in 1993 by a meteorite impact.

Ahmet Ozkul of Intelsat, the largest operator of global communications satellites, estimates that the probability of any of the company's 20 satellites being damaged by Leonid meteors in November will be less than 2 per cent.

The only humans in space during the meteor will be the crew of the storm Russian space laboratory Mir. The space laboratory will fail to get out of the way of the storm. US space experts point out that chances of damage to Mir are minimal, noting that even the space shuttle has faced cosmic debris from time to time without any serious effect. Nevertheless, the crew of Mir is expected to ride through the storm in the Soyuz re-entry vehicle that is docked with Mir. This will enable a speedy escape should Mir get severely damaged.

Whatever the risks may be, the atmosphere is full of expectations. Perry Nouis, spokesperson of the US Space Command, says, "This year's Leonid storm will give us a lot of data that may be useful for protecting satellites against future showers." As for the possibilities of a bright spectacle, people in East Asia will get the best possible view of the Leonid storm. If the skies are clear, they are likely to witness a great meteor display under the ideal conditions of a dark, moonless night.