Social Network>> History • The US 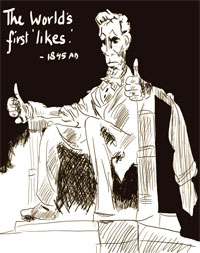 The blogger community was fervent about the claims made by Illinois blogger, Nate St Pierre. He revealed that Abraham Lincoln had requested for a patent for the visual appendix and concept of what we now call “Facebook” in 1845 but Lincoln’s request had been rejected.

The blog was found to be a hoax.

According to Pierre, Lincoln was proposing that each town build a centrally located collection of documents where every man would have his own page, and talk about himself as well as his work and family. Each man could also decide if he wanted to make his page available to the entire town, or only to family and friends.

In the first 24 hours after his post, the article was shared on Facebook more than 10,000 times, Pierre said. Forbes magazine posted a story under the headline, “Abraham Lincoln Filed a Patent for a Dead-Tree Facebook in 1845”.

But many historians soon investigated Pierre’s claims and found the story was fabricated. “I just did it for fun. But also wanted to make a bigger point: that the Internet would fall over itself to be first and share without checking,” Pierre said.