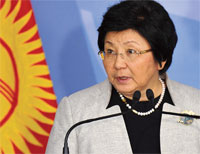 Candidates who want to contest the forthcoming presidential elections will have to pass a test of their ability to speak Kyrgyz.

Speaking Kyrgyz has been a prerequisite for those seeking the highest office since independence from the former Soviet Union in the 1990s. But not every politician is proficient in the language, especially the older lot educated in Russian.

The test is in three parts. First, candidates are asked to write a summary of their presidential programme. More than five mistakes in grammar or spelling, and a candidate is out of the race. In the second part, they are to explain the programme to the examiner, speaking freely. A candidate presented it in rhyme. The commission was not impressed and failed him. The third test is a reading from a published work.

The leader of opposition Green Party, Erkin Bulekbayev, stumbled his way through the presentation, and failed. The test is expected to cut down the candidate list from 83 to around 20.