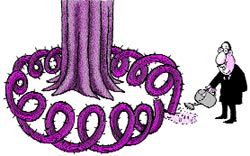 signalling a discernible shift in policy, wildlife experts have acknowledged that conservation activities in a protected area should revolve around its local inhabitants. This significant development took place at the just concluded Fifth World Parks Congress, organised by the World Conservation Union (iucn) from September 8-17 in Durban, South Africa. The decision to involve local communities and share the benefits of conservation with them was one of the major themes of the congress's final recommendations.

The new conservation strategy for the next 10 years was titled 'Durban Accord' and approved by the 2,500 delegates attending the once-in-a-decade congregation of conservationists, researchers and politicians. The pact lays emphasis on a community-oriented management strategy for protected areas. "It sets a new vision -- one that is clear as well as feasible for the world to implement," asserted David Sheppard, the secretary general of the congress.

The Durban Action Plan, charting out key targets and timetables for implementing the accord, was also adopted at the meeting. Though suggestions of the congress are not binding on member countries, they serve as guidelines for individual roadmaps. In all, 30 recommendations were made in Durban.

The meeting commenced on a positive note, as it was observed that the broad target of setting aside 10 per cent of the Earth's surface for protection had been surpassed by two per cent. The euphoria, however, soon gave way to concern over the paucity of funds for conservation activities. The congress estimated a us $2.5-billion shortfall in funding, covering some 1,00,000 protected sites across the globe. Ironically, the financial crisis is more severe in developing countries which are host to the planet's biodiversity hotspots. It has been decided that the exact monetary requirements for these areas would be calculated by 2006, so that the amounts can be arranged by 2010.

The participants agreed that there was an urgent need to explore funding avenues beyond government sources. Specific mention was made of the private sector's role in this regard. Furthermore, it was felt that indigenous peoples and local communities could contribute in exchange for the benefits they obtain from protection activities.

Highlighting the new management strategy, Kenton Miller, chairperson of the iucn World Commission on Protected Areas, declared: "The congress will ensure that the fruits of the protected areas are equitably shared." William Eichbaum of the World Wide Fund for Nature (wwf) averred: "At times, fees charged from the public for visiting a park can be utilised for the welfare of the local communities. This would encourage the latter to involve themselves in some of the larger wildlife management issues." Armed with its new plan, the congress hopes to conserve all threatened or endangered species in situ by 2010.

Marine parks figured on the agenda for the first time. Only 0.5 per cent of the world's oceans are protected at present. A network of marine parks would now be established by 2012.