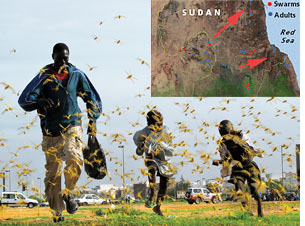 An outbreak of desert locusts (Schistocerca gregaria) in Sudan could intensify and spread along both sides of the Red Sea in winter this year. "This could give rise to a potentially dangerous situation in the region," warned the Food and Agriculture Organization (fao) on November 12.

A small part of an average locust swarm can eat food enough for 2,500 people in a day. Desert locusts are particularly dangerous because they can fly rapidly across great distances.

Small pockets of locusts remain in Sudan's northern and eastern deserts. Their number, however, dramatically increased this year following unusually heavy rainfall and flooding during the summer. "This moist sandy soil created an unusually favourable breeding condition for the wingless hoppers who caused an outbreak in October," said Keith Cressman, locust forecasting officer of fao. The Sudanese government has mobilized control teams to treat over 11,000 hectares. But it is facing difficulties treating infestations in remote areas. "Even if a few locusts are left untreated, more swarms could form and move to the coastal plains by the end of November," said Cressman.

Locusts are already present in Sudan's Tokar delta along the Red Sea in small swarms. Adult locusts arriving from the interiors will rapidly mature and lay eggs in the agricultural area, with hatching likely to occur from mid-December onwards.

Across the Red Sea, small locust swarms are still present and are breeding in the coastal plains of Yemen and Eritrea. In August, Yemen was hit by its worst locust infestation in 15 years, following heavy rains. If good rains fall this winter, they will multiply by February, said the fao report. Once conditions dry out, locusts could move towards the east to the Arabian Peninsula and towards the west to Darfur by early summer.