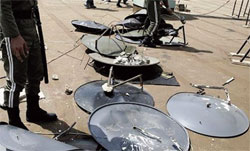 Iran has started jamming international broadcasting into the country. According to the Broadcasting Board of Governors (BBG), the jamming is linked with reports of demonstrations and mass arrests of Iranians protesting the declining value of its currency, rial, which is at its lowest in two decades due to international sanctions on the country’s oil and trade sectors. Both Voice of America and news agency REF/RL report that in some instances, interference starts just before newscasts and ends just afterwards.